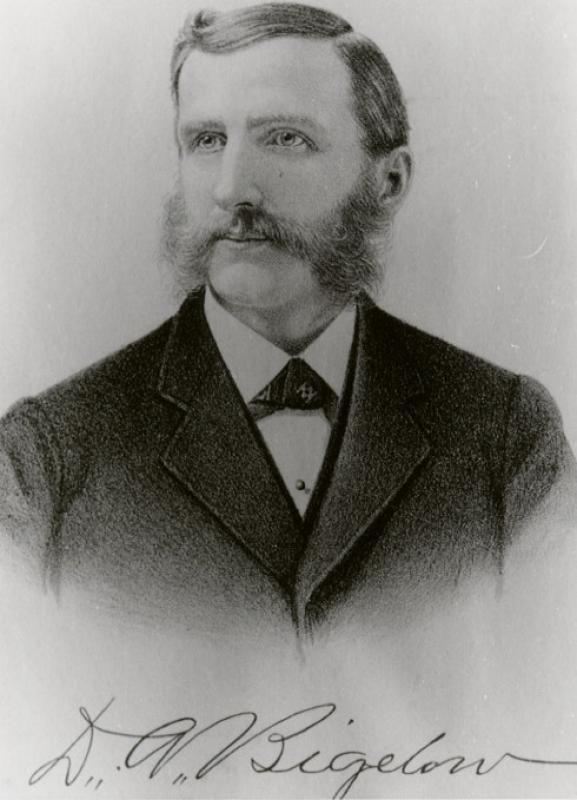 D. A. Bigelow was one of Ames's first merchants, arriving in 1866. He went into business here with Henry C. Huntington, who had moved to Ames from Rochester, Vermont. They opened a dry goods store in 1867 on Onondaga (Main) Street. Bigelow had served in the Civil War, with the final rank of Lieutenant Colonel in Company A of the 124th Illinois regiment. Bigelow, whose middle name happened to be "Ames," and Huntington asked George Galen Tilden (Farwell Tilden Brown's maternal grandfather), who also had grown up in Rochester, Vermont, to join their partnership in 1869. Bigelow, Huntington & Tilden remained in business until 1883 when George Tilden bought out his partners. Bigelow and Huntington then opened another store a few doors to the west on Onondaga and operated under the name of Bigelow & Huntington. D. A. Bigelow served on the Story County Board of Supervisors from 1878 through 1880 (when he was the chairman). He died in 1890.
Citation: 125.690.2
Year: 1875 (approx.)
Categories: Businesses, Wars & Military, Misc., Downtown/Main St., People
Tags: BIGELOW, HUNTINGTON & TILDEN, CIVIL WAR, BIGELOW & HUNTINGTON, STORY COUNTY BOARD OF SUPERVISORS, STORES, DRY GOODS, ONONDAGA STREET, BIGELOW, D. A., MAIN STREET
< Back to Search