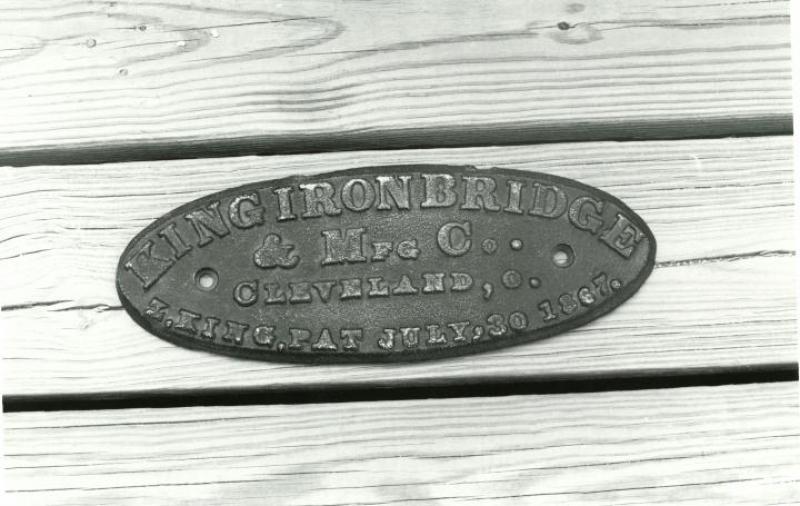 Iron plate as it appeared on the Soper's Mill Bridge (also known as the Old Iron Bridge, the Rainbow Bridge, and the Bowstring Bridge. The plate shows the maker of the bridge to be the King Iron Bridge & Manufacturing Co., Cleveland, Ohio. The patent on the design of bowstring bridges is shown as being obtained by the company on July 30, 1867. The iron bridge near Soper's Mill, over the Skunk River, was completed on September 1, 1876. When the old bridge was placed on the National Registry of Historic Places in 1977, a casting was made of the plate. That casting resides in the library of the Story Conservation Board in McFarland Park. Before the bridge was recognized as a place of historic significance and when its was in danger of being torn down, vandals removed the plate from the bridge and stole it. The bridge itself was destroyed in the June 17, 1996, flood on the Skunk River.
Citation: 13.61.3-4
Year: 1876
Categories: Places/Buildings, Businesses, Parks & Nature
Tags: SOPER'S MILL BRIDGE, BOWSTRING BRIDGE, BRIDGES, KING IRON BRIDGE AND MANUFACTURING COMPANY, RAINBOW BRIDGE, STORY COUNTY CONSERVATION BOARD, OLD IRON BRIDGE, MCFARLAND PARK, SKUNK RIVER
< Back to Search