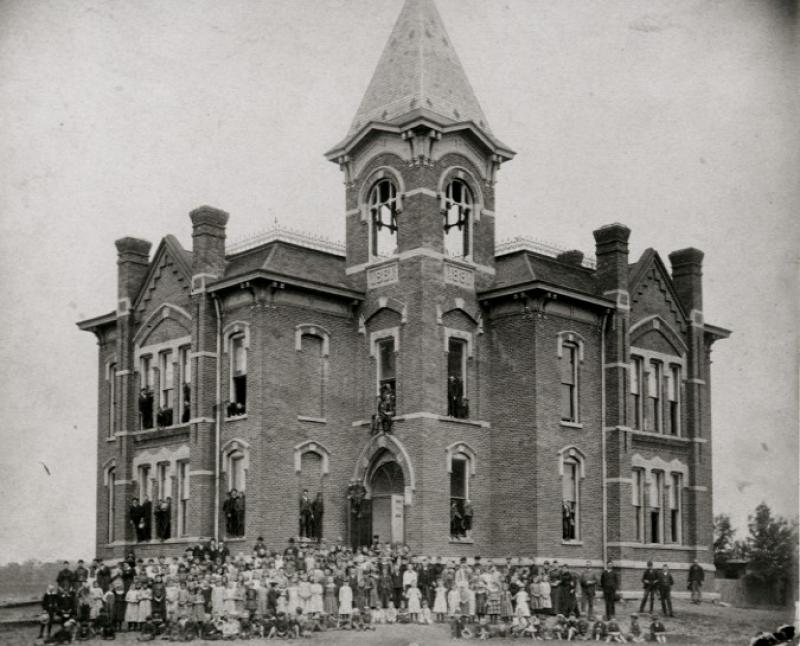 At the regular annual school election in March, 1880, the Ames school board submitted a request to issue bonds for the purpose of building a new school house. They were asking for $10,000. When the votes were counted they had 148 citizens in favor, 28 against. This debt was contracted and the first brick school house, known as Central School, was constructed on the west side of Clark Avenue near Sixth Street. The building opened in 1881. Members of the Board of Education at this time were D. A. Bigelow, William West, D. S. Fairchild, and Isaac Black, directors; John Watts, secretary; and W. F. Chevalier, principal. The new building had six large classrooms, two of which were used for high school classes, and four of which housed the primary and intermediate grades. In addition to the classrooms, there was an office for the principal and basement restrooms. An addition which contained four more classrooms was built in 1900, but its construction was so shoddy that the addition was condemned in 1910 and removed. After Bearshear Elementary School was built in the First Ward in 1903 and Welch Elementary School opened in the Fourth Ward in 1906, this building was used exclusively for high school students. In 1911, a new high school was built on the east side of Clark, across the street from this building which then was utilized as an elementary school. In 1924, it became Ames's first junior high school until it was razed to make way for a new high school built in 1937. In 1939, the junior high school occupied the east building. (See also: 196.1112.1)
Citation: 196.1111.1-3
Year: 1885
Categories: Schools, Places/Buildings
Tags: SCHOOLS, CENTRAL SCHOOL, SIXTH STREET, AMES HIGH SCHOOL, CENTRAL JUNIOR HIGH SCHOOL, CLARK AVENUE
< Back to Search