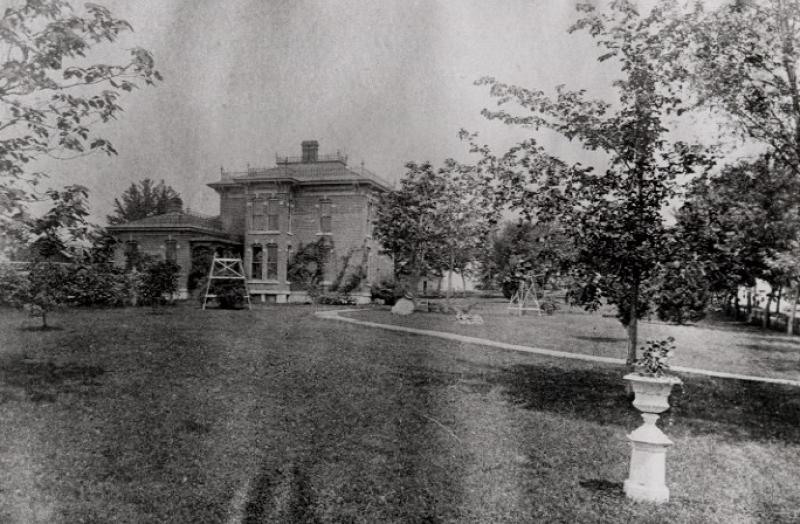 The south side of the Kendrick Wade Brown family residence on Kellogg Avenue in about 1888. The address of the house was later to be 1009/1011 Kellogg. It was built in 1879. At that time it was two blocks from the next nearest house in Ames. The size of the lot in this photograph reflects that fact. Kendrick Brown kept a horse and cow on the property. He was also an accomplished gardener; notice the plantings alongside the curved walk leading up to the house. That walk came up from Kellogg Avenue which is not visible but would be to the right of the photograph. There were numerous fruit trees on the back side of the lot. In the early days of the house, there were no city services for the residence which had its own well and cistern. Notice the wrought iron fencing around roof, a common decorative finish to fine houses of the era. The soft brick for the exterior of the house came from the Cole family kiln on the then-north edge of Ames. In 1917, Kendrick Brown's younger son Harry Brown named the house "Kenwade" to honor his father. At about this time, Harry Brown and his family (wife Mary Tilden Brown, son Farwell Tilden Brown, and daughter Josephine Brown) moved into the house which was divided into two side-by-side living quarters, one for Kendrick and Margaret Brown, and the other for their son's family. Harry Brown did extensive remodeling of the house, covering the brick exterior with pebblestone (cement with little stones imbedded in it). Farwell Brown lived in this house with his family until 1936. (A wider view of this same photography: 119.654A.4-6)
Citation: 119.654B.4-6
Year: 1888 (approx.)
Categories: Misc., Houses
Tags: KELLOGG AVENUE, HOUSE, BROWN (KENDRICK W.)
< Back to Search