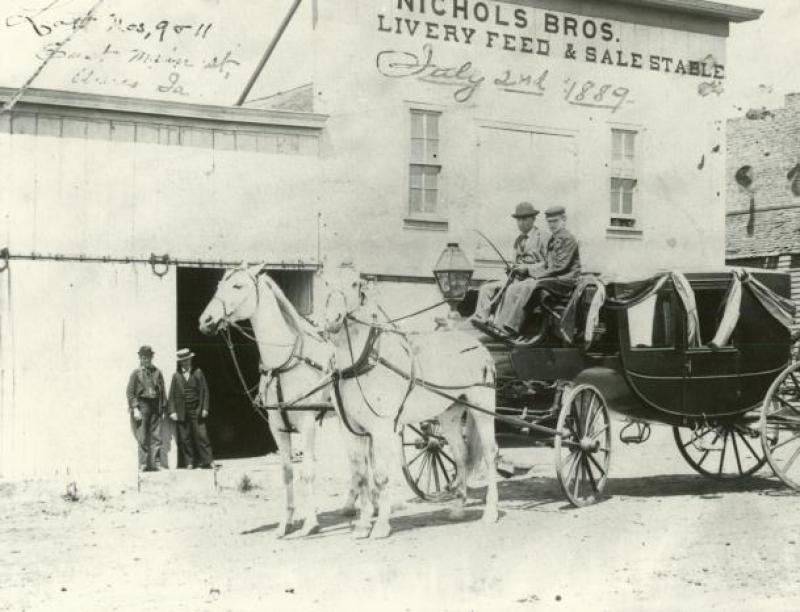 A July 2, 1889, photo of Nichols Livery. The brougham was used for prominent local citizens (president of the college, mayor, etc.)--often conveying them in funeral processions. Charles Nichols is in the driver's seat.His brother George weighed over 500 pounds and appeared in sideshows as the "fatman." Ownership of the livery later passed to Lynn Morris and was known for some time as Morris Livery. The west side of the Ames Hotel can be seen on the right. The small building between the hotel and the livery, at this time, was the B. Alberts sign painting firm, but later housed the Hytland Shoe Hospital, a longtime Ames establishment.
Citation: 43.215.2-4
Year: 1889
Categories: People, Transportation, Businesses, Misc.
Tags: NICHOLS, CHARLES, MORRIS (LYNN) LIVERY, NICHOLS LIVERY, FEED & SALE, NICHOLS, GEORGE W., HYTLAND SHOE HOSPITAL, ALBERTS (B.) SIGN PAINTING SHOP, LIVERY STABLES
< Back to Search