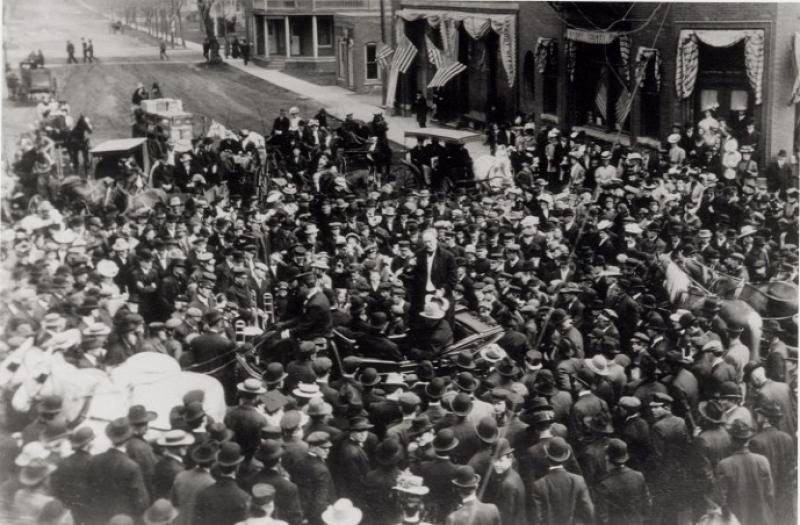 Looking north up Douglas Avenue from the Onondaga (Main) Street corner to Fifth Street. The Ames Hotel (one of two hotels known as "The Ames Hotel," the other was once located on Main Street) is the building with the four pillars in the upper left center of the photograph. The hotel building stood at 416 Douglas Avenue until it was razed in 1985. The Story County Bank, on the northeast corner of Onondaga and Douglas, is the building in the upper right of the photograph. The building to the north of it (with the flags flying) is the post office, built in 1891. A new post office building was built on the corner of Fifth Street and Kellogg Avenue in 1912 (to be supplanted by a larger building on the corner of Sixth and Kellogg in 1935). Because there are no automobiles in this photograph--only horses, buggies, and wagons--the date is probably sometime in the 1890s or early 1900s. The occasion was a patriot celebration of some sort. The clothing indicates a chilly, but not frigid, time of year (not the Fourth of July)--perhaps Decoration (Memorial) Day in late May, though there is no one in military attire in the gathering. This may have been a political rally of some sort. The carriage in the center of the photograph contains three seated gentlemen and one standing gentleman who appears to be addressing the crowd. Members of a band are seen standing behind and to the left of the carriage. A photographer's camera and tripod are seen immediately behind the band.
Citation: 215.1221.1-4
Year: 1898 (approx.)
Categories: Misc., Businesses, Downtown/Main St., Transportation, People, Places/Buildings
Tags: POST OFFICE, BANKS, PHOTOGRAPHERS, STORY COUNTY BANK, HORSES, ONONDAGA STREET, WAGONS, BANDS, DOUGLAS AVENUE, HOTELS, AMES HOTEL, BUGGIES, MAIN STREET
< Back to Search