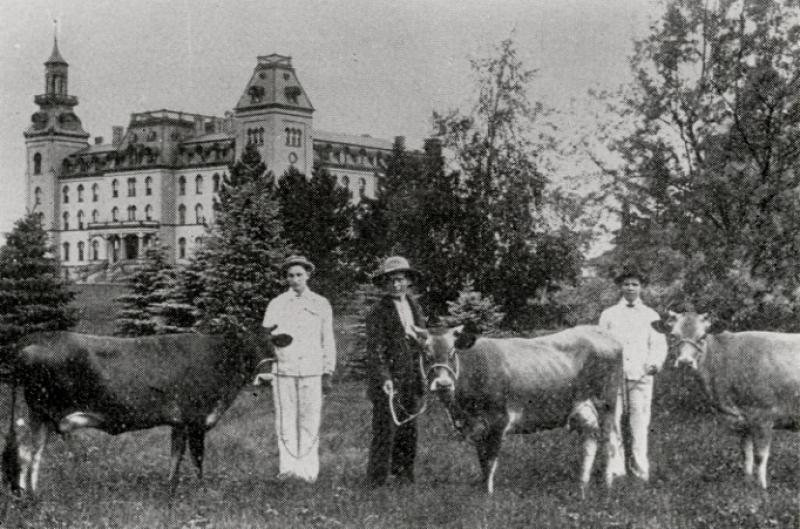 Three boys pose with their exhibition cows in the field northeast of Main Hall (also known as the College Building, the College, and Old Main). The boys belonged to one of the precursors of the 4-H Club. Early efforts to provide agricultural education and practice to Iowa's children were known as the Boys Corn Club and the Girls Home Club. Miss Jessie Field of Shenandoah, Iowa, was elected county supervisor of Page County in 1906. She began to organize the county's children into agricultural clubs. The Page County Boys Agricultural Club caused a sensation by exhibiting and taking 1st prize in a corn competition with adult corn growers at the county fair in Clarinda in 1909. To encourage more boys to show results of their work, Miss Field designed a pin, a 3-leaf clover, to represent scientific agriculture. The letter H placed on each leaf stood for head, hand, and heart. In the center was a kernel of corn bearing the word "Page" "Iowa" appeared on the stem. The club was then known as "3-H". Later a fourth H was added symbolizing home, when the girls organized. This was the beginning of the 4-H clubs, which were then promoted all over the country by agents of the U.S. Dept. of Agriculture. Main Hall was one of the original building of Iowa State College when it opened. Built in 1864-1868, it was the center of the campus until it burned in 1900 and 1902. Beardshear Hall was erected on the site of Old Main, 1903-1906.
Citation: 112.618.5
Year: 1899 (approx.)
Categories: ISU / ISC, Local Organizations, Misc.
Tags: IOWA STATE COLLEGE, 4-H CLUB, CATTLE, MAIN HALL, ISC
< Back to Search