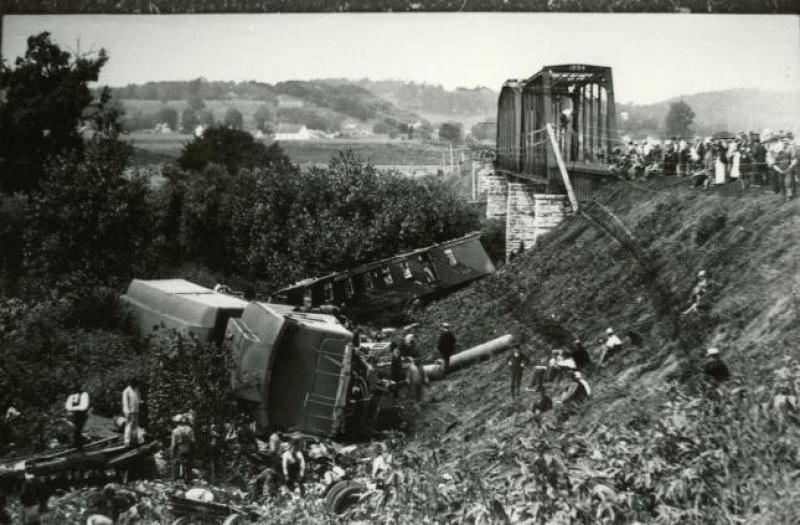 Train wreck in 1899. The railroad bridge in the photo is over the Des Moines River, just below where Kate Shelley lived in Moingona, Iowa, at the bend in the tracks that is still referred to as the "Shelley Curve." The bridge is the second bridge that Kate Shelley crossed on the night of July 6, 1881; the first was one that had been washed out over Honey Creek (one of eleven between Boone and Moingona). This one was approximately thirty feet above water in normal conditions and was simply called the Des Moines River bridge near Moingona. The footings are still visible [2011]for the old bridge; a new bridge was built in the early 1900s. This train wreck photo has been misidentified in many places as one that occurred in 1877, or as the Honey Creek wreck of 1881. It is neither, as both occurred before this bridge was built in 1894 [the date is seen at the top of the bridge structure]. According to a newspaper article in 1899, this mail train may have been going 80 miles an hour. Four were killed and at least seven were badly injured. The car nearest the bridge reads "North Western Line" and is a United States postal car. The train that crashed was a "pusher" whose purpose was to check the line for bridges that were out or for other hazards along the line. Vegetation in this photo suggests late spring or summer as the time of year.
Citation: 9.36.3
Year: 1899
Categories: Events, Transportation, People, Misc.
Tags: TRAIN WRECKS, SHELLEY, KATE, RAILROADS, MOINGONA (IOWA), BRIDGES, RAILROAD, DES MOINES RIVER
< Back to Search