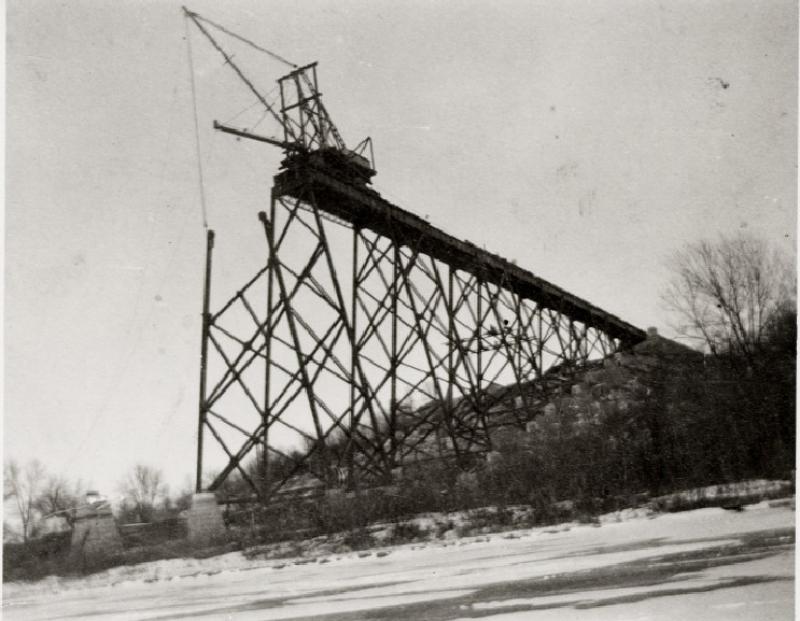 The high bridge when under construction over the Des Moines River, west of Boone (Iowa). Designated by the Chicago & North Western Railroad as the Kate Shelley Viaduct to honor the heroine of the July 6, 1881, flood who crawled across the previous single-track high bridge to warn the trainmen at the Moingona, Iowa, depot of a washed-out railroad bridge over Honey Creek. This was the largest double-track railroad bridge in the world at the time of its construction. William Coulson Armstrong, the C & NW engineer in charge of construction, was an Iowa State College graduate. Born in 1859 in Marietta (Iowa), Armstrong received his BS in civil engineering from ISC in 1881, professional C.E. certification in 1901, and an advanced engineering degree in 1904. He was bridge engineer for the C & NW through 1904, then was named terminals engineer. In 1914-1916, he was in charge of the construction of the Union Depot in St. Paul (Minnesota). Armstrong was also president of the Western Society of Engineers from 1912-1913. He died in St. Paul in 1923. (Photo, courtesy of Maxine Brown)
Citation: 195.1108.1-4
Year: 1900
Categories: People, Places/Buildings, Transportation, Misc.
Tags: SHELLEY, KATE, BOONE (IOWA), KATE SHELLEY BRIDGE, CHICAGO & NORTH WESTERN RAILROAD, BRIDGES, RAILROAD, DES MOINES RIVER, ARMSTRONG, WILLIAM COULSON
< Back to Search