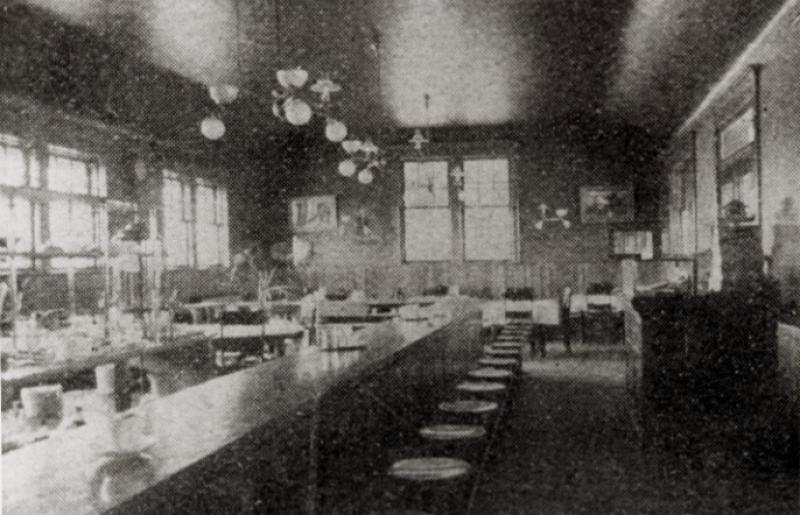 Newsprint photograph, looking easterly, of the interior of the Chicago & Northwestern Depot's restaurant, known at the time as "Dunne's Lunch Counter." This photo is dated 1901. The railroad depot opened in 1900. The restaurant occupied the area immediately to the east of the depot waiting room. This very popular restaurant was first operated by a man named Dunne who was also responsible for other restaurants along the main line of the Chicago & North Western Railroad in Iowa. He also ran the restaurant in the Boone, Iowa, depot. Later a man named C. R. Quade took over the restaurant. After the end of his restaurant career, Quade became a well-known professional photographer in Ames. The restaurant was a popular downtown dining spot for many years. Farwell Brown remembers eating there after he graduated from Iowa State College in 1933 and recalls that it was the lunch place of choice for Ames business people and for employees of the Iowa Highway Commission. This is the only photograph he has been able to find of the depot restaurant. (See also: 172.964.1-2)
Citation: 172.963.4-5
Year: 1901
Categories: People, Places/Buildings, Transportation, Misc., Businesses
Tags: QUADE, C. R., DEPOT, RAILROAD, CHICAGO & NORTH WESTERN RAILROAD, RESTAURANTS, DUNNE'S LUNCH COUNTER
< Back to Search