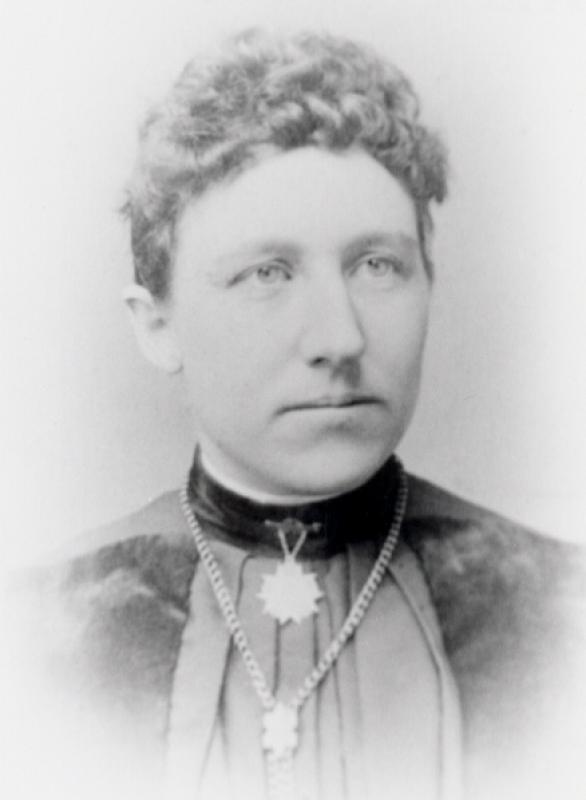 A photographic portrait of Kate Shelley (9/25/1865-1/21/1912)in middle age. Shelley behaved heroically in the summer of 1881 during a flood which encompassed central Iowa. She was a girl of fifteen and was livng near Honey Creek on the east side of the Des Moines River in Boone County. The Chicago & North Western Railroad's tracks ran past her house. On the night of July 6, Kate heard the bell of a "pusher" engine ring out in distress, followed by the hiss of steam as the train hit the water of Honey Creek. With only her father's old lantern to light the way, Kate Shelley ran to the creek and discovered Adam Agar and Ed Wood clinging to tree roots in the creek. She ran toward the depot in Moingona to alert the people there to the accident and to get them to stop the Midnight Express passenger train coming from the west before it reached the washed-out bridge. In 1901 when a new steel bridge replaced the old high bridge over the Des Moines River, it was named the Kate Shelley Bridge to honor her heroism. Kate Shelley became the stationmaster at the Moingona depot in 1903 and served there until shortly before her death in 1912.
Citation: 119.653.1-3
Year: 1903 (approx.)
Categories: People, Parks & Nature, Misc., Transportation
Tags: SHELLEY, KATE, HONEY CREEK, MOINGONA (IOWA), FLOODS, BRIDGES, RAILROAD, DES MOINES RIVER
< Back to Search