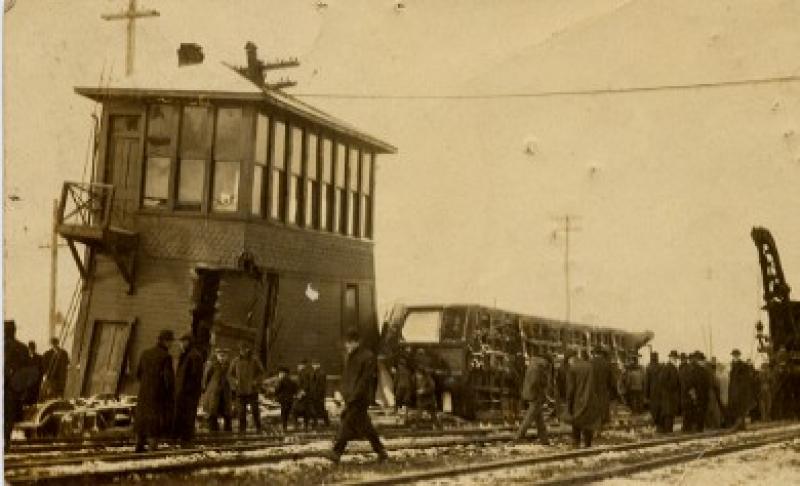 A picture postcard, postmarked November 10, 1907, depicts a train wreck in Ames. The inscription on the back of the postcard reads: "This is a picture of a smash up here the other day. An interurban car was hit by a freight on the North Western. John and I were down there that night but were fortunate enough not to be on the car. It makes a trip every 20 minutes between the college and Ames. Bert" The card was addressed to Miss M. E. Reynolds/Buffalo Gap, South Dakota. (This photograph was scanned from the original postcard, the property of Hank Zaletel. The Farwell T. Brown Archive possesses neither a negative nor a print of this postcard.) The following is an account of the accident from the November 14, 1907, issue of the "Ogden Reporter": Ten people were seriously injured and a whole carload of forty or more miraculously escaped death in a crossing accident between a North Western freight train and an interurban car on the electric line between Ames and Iowa State College. Through an error, both the freight train and the electric car were given the right-of-way over the crossing, which is at the intersection of curves on both lines. The engine of the freight train struck the electric car almost in the middle, throwing it forty or fifty feet, where it was stopped and almost entirely demolished by the crossing watch tower, which was moved from its foundation by the impact. The forty or more passengers in the car were thrown about violetly, and practically all of them suffered minor or serious injuries. The most seriously injured were: Miss Esther Livingston, student, injured internally. Prof. H. G. Bell, leg broken and injured internally. Connor, of Ames, skull fracture and jaw broken. Motorman James Robinson, injured internally. F. M. Hanson of Jefferson, Ia., secretary Greene Co. Y.M.C.A., leg injured. Mr. and Mrs. Bert Smith, students, badly bruised. Miss Bertha Williams, student, face cut. S. Creel, Mexican student, hand cut. M. Cruz, Filipino student, face cut. It is expected that all will recover. Both the electric car, which was on its way to the college from Ames, and the freight train, which was on its way from Des Moines, received signals from the man in the crossing tower that the tracks were clear. The two tracks cross each other on a curve at this point, and two water tanks further obscure the view. Not until it was too late did the motorman or the engineer realize that an accident was imminent, but their efforts to stop were in vain. The engine struck the electric car squarely as it was about half-way across the railroad track with an awful impact."
Citation: 232.1335.1
Year: 1907
Categories: Events, Transportation, People, Misc.
Tags: TRAIN WRECKS, SMITH, BERT, INTERURBAN RAILROAD, STREETCARS, CREEL, S., CRUZ, M., HANSON, F. M., LIVINGSTON, ESTHER, ROBINSON, JAMES, CHICAGO & NORTH WESTERN RAILROAD, CONNOR, ?, BELL, H. G., WILLIAMS, BERTHA
< Back to Search