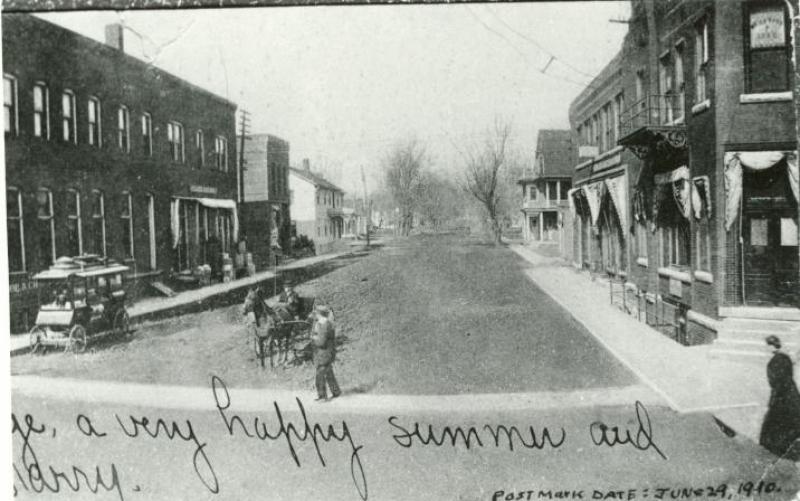 Postmark on this postcard is June 29, 1910, but date of photo is probably around 1907. Looking up Douglas(s) Avenue from Onondaga (Main) Street. Popcorn wagon seen on left. In background on left can be seen the Arlington Hotel (originally, West House), Ames' first hotel on the corner of Fifth and Douglas. Across the street is the building which would become the Ames Hotel. At time of photo it was the home of dentist Charles Hunt who had his practice on the ground floor front near the door. At right on corner is Story County Bank founded by Parley Sheldon. It was on this corner from 1890s until 1917 when it moved to the Sheldon-Munn building. On left, halfway down street, is Tilden Grocery (with produce shown in front). Across the alley to the north is the newspaper office. Tilden Grocery bought this building in 1915 and located its store there. (See also: 25.125.1-3)
Citation: 25.122B.1
Year: 1907 (approx.)
Categories: Businesses, Misc., Places/Buildings, People
Tags: TILDEN GROCERY, BANKS, ARLINGTON HOTEL, STORY COUNTY BANK, WEST HOUSE, DOUGLAS AVENUE, STORES, GROCERY, HOTELS, WAGONS, POPCORN, HUNT, CHARLES E., AMES HOTEL
< Back to Search