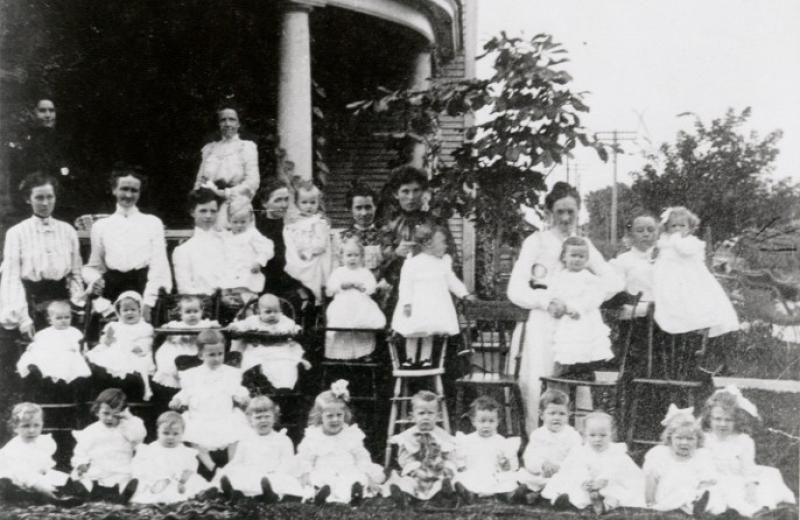 This is a gathering of the Duff family in Ames around 1908. Cynthia Olive Kellogg Duff (1820-1907) was the second wife of Alexander Duff (1814-1896). They moved to central Iowa in 1863 where they had a farm. In their forties when they moved to the area, they were among Ames's "older" settlers and came to Iowa with a substantial bankroll. Cynthia was instrumental in bringing the railroad through Ames in that she sold John I. Blair, the railroad magnate, the land which he platted and called Ames in 1864. The women and children in this photograph are the descendents of Alexander and his first wife, Sarah Ann Kellogg Duff (a first cousin to Cynthia). Though Cynthia had no children of her own, she was devoted to her step-children. Those children who survived her were Elizabeth McCollum, of Ottawa, Illinois; Jennie Batman, of Nevada, Iowa; Cassie Gregg of Ames; and Alexander Duff, Jr., of Leavenworth, Kansas. Those in this photograph, though not identified, are the offspring or relatives of Alexander's children. (See also: 222.1273.1)
Citation: 222.1272.3-5
Year: 1908 (approx.)
Categories: People
Tags: DUFF, CYNTHIA O., DUFF FAMILY
< Back to Search