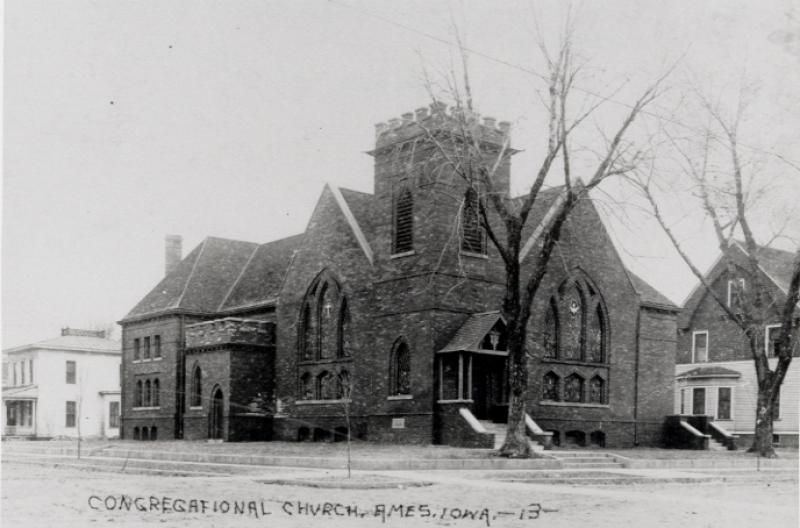 This photograph of the Congregational Church on the corner of Kellogg Avenue (the left portion of the photo) and Sixth Street (the right portion) was taken around 1908. The streets were re-graded in 1915 so that ever after, the church has been atop a small rise. This photograph shows three steps leading from the sidewalk up to the grassy area in front of the church steps on the Sixth Street side. After the re-grading of the street, these were replaced by six steps. This church (now called United Church of Christ, Congregational) was built in 1900 and was the Congregationalists' second building on this site. The first building was dedicated in 1866 and was the first church built in the new town of Ames. Also visible in this photograph is the parsonage to the east of the church (right side of the photograph). The residence north of the church on Kellogg Avenue (in left side of photograph) has a cupola.
Citation: 226.1298.1-5
Year: 1908 (approx.)
Categories: Churches, Misc., Places/Buildings
Tags: CHURCHES, UNITED CHURCH OF CHRIST, CONGREGATIONAL, KELLOGG AVENUE, SIXTH STREET, CONGREGATIONAL CHURCHES
< Back to Search