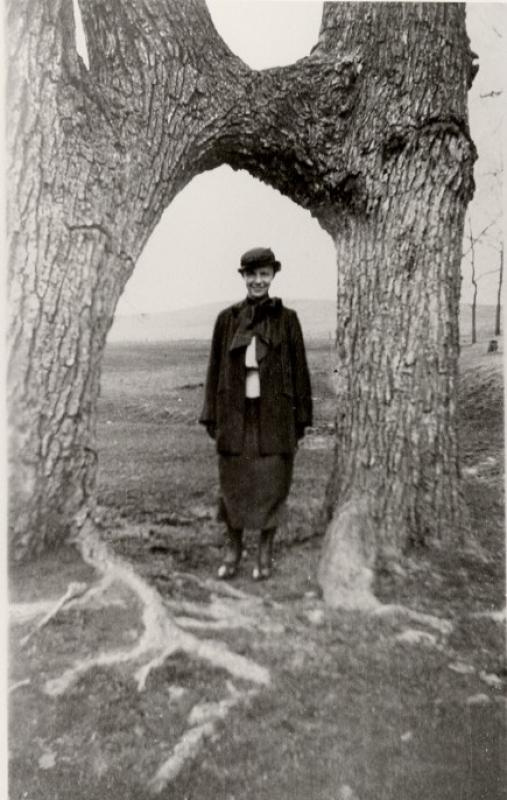 Photograph, taken around 1910, of the locally famous "H" tree which is actually a graft of a red (or, slippery) elm and and a white (or, American) elm. The trees first grew in the late eighteenth century and may have been joined together on purpose by the Native Americans who inhabited the area around the Skunk River (known to the Indians as the "Cha Ca Gun" or "Chichaqua") or by natural accident. After the advent of European Americans in the early nineteenth century, the site became a local wonder and many a person was photographed in or near the "H" tree. But by the 1960s, the pair of elms no longer had the vigor of youth they would have needed to fend off the spread of Dutch Elm disease. Though the bare-branched "Siamese twin" trees continued to stand through over two decades, the ravages of storms and highwater finally claimed the "H" tree in 1986. A chain saw cut near the top of the American Elm revealed more than 200 rings. The "H" tree stood in an area about two miles north of Gilbert, Iowa, on the banks of the Skunk River.
Citation: 97.523.1-3
Year: 1910 (approx.)
Categories: Misc., Parks & Nature
Tags: GILBERT (IOWA), TREE, "H", TREE, "H'
< Back to Search