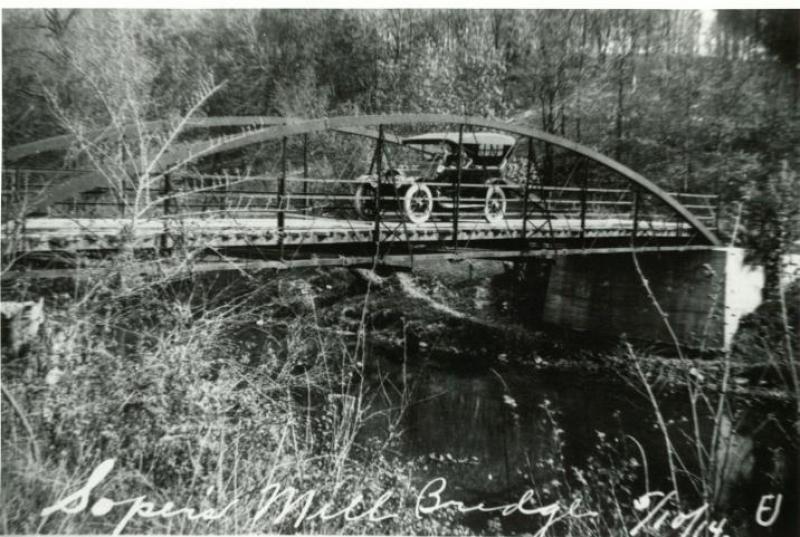 Automobile crossing the old Soper's Mill Bridge (also known as the "Old Iron Bridge," the "Rainbow Bridge," and the "Bowstring Bridge," over the Skunk River near Soper's Mill in 1914. The bridge was built in 1876 by the King Iron Bridge and Manufacturing Company of Cleveland, Ohio. The old bridge remained a part of the county road system until 1930 when a new bridge was built to the west. However, it was used by automobiles into the 1960s. Eventually, it was incorporated into Soper's Mill Park, owned by the Izaak Walton League. After the Walton League moved, the area became a state park. Today [2011], the Soper's Mill area is part of the Skunk River Greenbelt. [Note: The Old Iron Bridge was washed out in the June 17, 1996, flood on the Skunk River.] For a comprehensive list of the old Soper's Mill Bridge, see "Sopers Mill bridge has long, colorful history," by Becky Rippel, "Ames Daily Tribune," Saturday, May 13, 1978. p. 1A and following.
Citation: 11.47.3
Year: 1914
Categories: Places/Buildings, Transportation, Businesses, Parks & Nature
Tags: SOPER'S MILL BRIDGE, BOWSTRING BRIDGE, AUTOMOBILES, BRIDGES, KING IRON BRIDGE AND MANUFACTURING COMPANY, RAINBOW BRIDGE, SOPER'S MILL, OLD IRON BRIDGE, SKUNK RIVER
< Back to Search