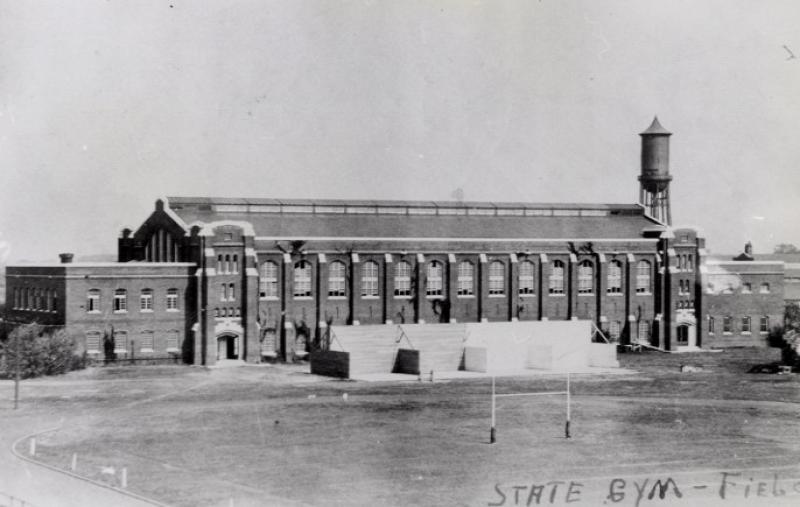 The south side of the men's gymnasium (officially, the State Gymnasium)at Iowa State College, taken from across the athletic field. The structure between the field and the building is a handball court (with four playing areas). The handball courts were later moved to the east of the field. One interesting aspect of the construction of the State Gymnasium is that it was constructed by the college's buildings and grounds crew, headed by Building and Grounds Superintendent Thomas Sloss. Bids for the gym's construction came in over what the Iowa legislature had appropriated. The swimming pool would have had to be eliminated to make the construction possible if done by any of the bidders, so Tom Sloss agreed to have his staff build it themselves--with the swimming pool. The development of the field was delayed by the absence of funds with grading done only spasmodically. It was 1914 before the field was in full use. It was known as "New State Field" or "State Field." The field was dedicated in 1938 as "Clyde Williams Field" to honor the man who served Iowa State from 1906 to 1919, the last five years as athletic director. The Marston water tower can be seen in the background on the right of this photo.
Citation: 185.1046.3-5
Year: 1914 (approx.)
Categories: ISU / ISC, Sports
Tags: CLYDE WILLIAMS FIELD, ISC, STATE GYM, ISC, MARSTON WATER TOWER, IOWA STATE COLLEGE, HANDBALL COURTS, ISC
< Back to Search