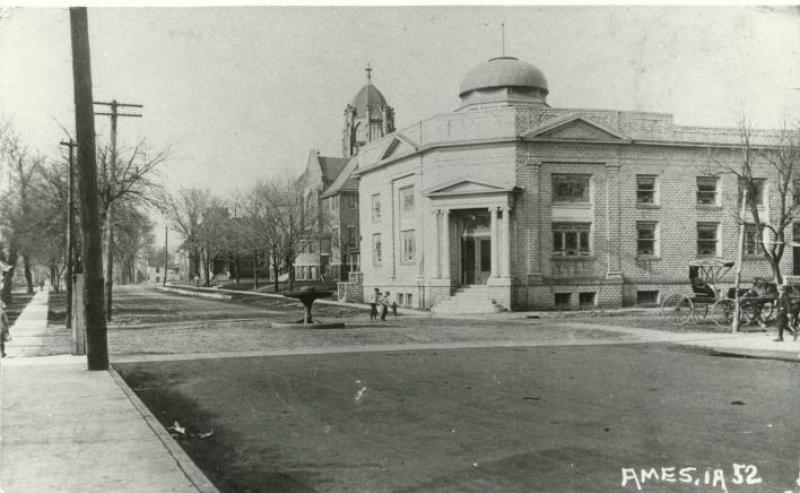 The corner of Kellogg Avenue and Fifth Street, looking north. First Baptist Church, completed in 1910, is seen on the northeast corner. First Methodist and First Congregational churches are further up the street on the right. The cast-iron watering trough and hitching post, were still in use at the time of the photo. The buggy in the center right of the image is tied up near the old Ames Town Hall which can not be seen in the photo. Kellogg Avenue and Fifth Street were paved in 1916-1918. Another copy of this image [181.1020.2] was one of the items recovered on January 24, 1996, from the time capsule that was enclosed in the cornerstone of the 1915 Ames Municipal Building. The building was then renovated for use by Youth and Shelter Services. ID77.398.2 is a cropped image of this photograph.
Citation: 76.393.1-5
Year: 1915
Categories: Churches, Misc., Places/Buildings, Transportation
Tags: CHURCHES, UNITED CHURCH OF CHRIST, CONGREGATIONAL, FIRST BAPTIST CHURCH, KELLOGG AVENUE, TOWN HALL, METHODIST CHURCHES, BAPTIST CHURCHES, MUNICIPAL BUILDING, WATERING TROUGHS, YOUTH AND SHELTER SERVICES, TIME CAPSULE, FIRST METHODIST CHURCH, CONGREGATIONAL CHURCHES, FIFTH STREET, BUGGIES, HITCHING POSTS
< Back to Search