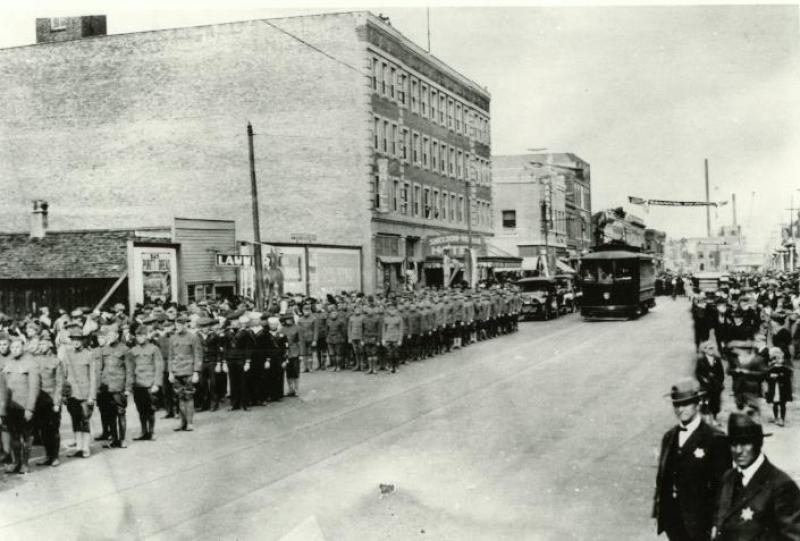 A portion of a panoramic photograph of the two-block long parade on Main street on May 20, 1919 to welcome returning World War I servicemen. The front contingent is the medical corps led by Ames physician E. B. Bush. The center troops are Navy. The Sheldon-Munn Hotel (built in 1916 is shown in the center of the photo. An Interurban streetcar and the power plant chimney can be seen at the easternmost end of Main Street. Paradise Candy Kitchen is on the northeast corner of Kellogg and Main across from the hotel. Sam Ding's laundry can be seen west of the hotel. In the foreground is the town marshall, his assistant and the fire chief. For details of this parade see the May 21, 1919 "Ames Tribune." (See also: 35.178B.2-4; 36.179.1; 111.613.2)
Citation: 35.178A.1
Year: 1919
Categories: Downtown/Main St., Places/Buildings, Businesses, People, Wars & Military, Misc., Events
Tags: PARADISE CANDY KITCHEN, SHELDON-MUNN HOTEL, BUSH, EARL B., WORLD WAR I, LAUNDRIES, HOTELS, PHYSICIANS, PARADES, DING, SAM, MAIN STREET
< Back to Search