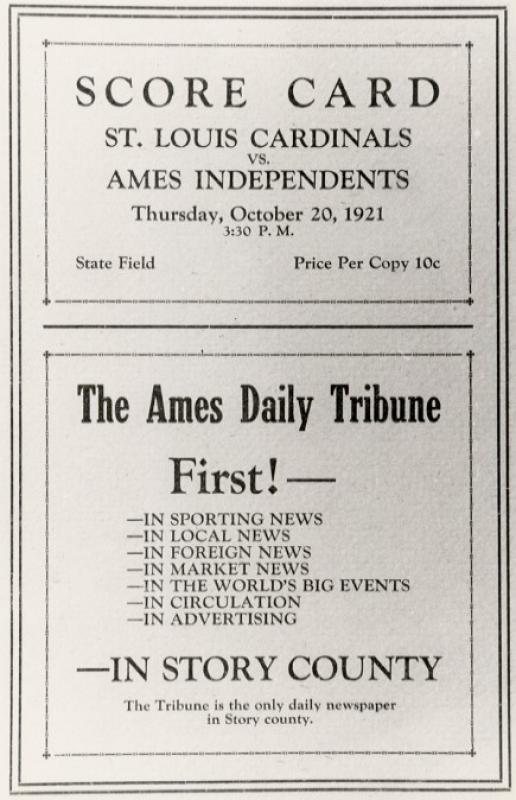 The top half of this advertisement is for copies of the score card of an exhibition baseball game between the St. Louis (Missouri) Cardinals and the Ames Independents teams at the State Gymnasium Field at Iowa State College on Thursday, October 20, 1921, at 3:30 p.m. The cards are ten cents per copy. The bottom half advertises the paper itself, "The Ames Daily Tribune," which it says is "First! in sporting news, local news, foreign news, market news, the world's big events, circulation, and advertising, and in Story County" where it was, indeed, the "only" daily paper. The Cardinals beat the Independents that day 16 to 3. Bruce Judson "Bugs" Firkins, a well-known member of Iowa State College's Agronomy Department from 1919-1960, was on the Independents team. When the Cardinals hit a fly ball in his direction, Bugs pretended to be mortally threatened as he ran madly for the bleachers.
Citation: 94.510.2
Year: 1921
Categories: Misc., Sports, ISU / ISC, People
Tags: AMES DAILY TRIBUNE (NEWSPAPER), ADVERTISING, ST. LOUIS CARDINALS (BASEBALL TEAM), AMES INDEPENDENTS (BASEBALL TEAM), NEWSPAPERS, IOWA STATE COLLEGE, FIRKINS, BRUCE JUDSON "BUGS"
< Back to Search