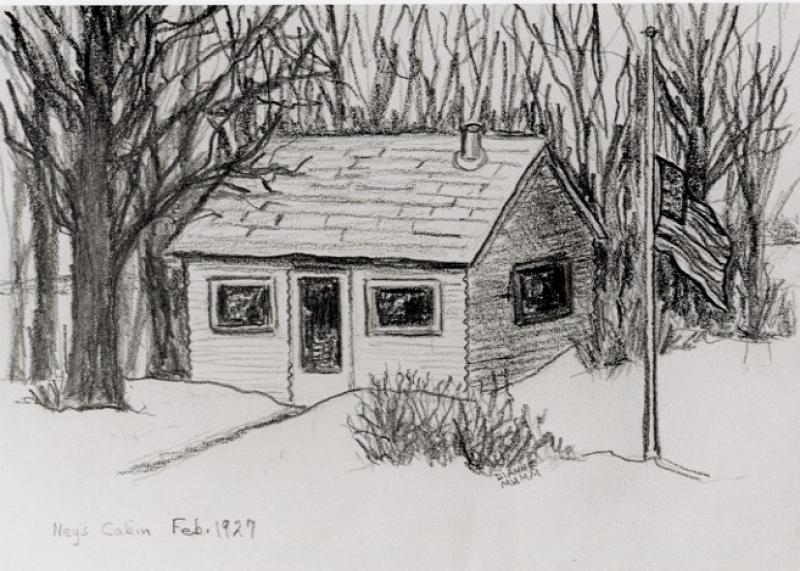 Christopher Ney was known in Ames only as a recluse. He had attended Iowa State College in 1889/90 where he studied civil engineering. He later obtained a law degree from the University of Minnesota and passed the Iowa bar in 1895. When the Spanish-American War broke out, Ney enlisted and saw service in the Philippines. In 1901, President Taft appointed Ney the treasurer of the province of Ilocos and a few months later appointed him the governor of the province of Luzon. He practiced law in Manila until 1913. A series of personal losses led to his eventual abandonment of his career and his return to Ames where he lived in anonymity in this tin-covered cabin until his death in 1927. The cabin, built by Ney himself, was located north of Thirteen Street in the vicinity of Ridgewood and Summit avenues. It was possibly the first habitation in that area of Ames. This sketch of the cabin was drawn by Ames artist Dianne Mumm in 1996 from a February 13, 1927 "Des Moines Register" photo. For more information on Ney, see Chapter 30, pp. 109-111, in "Ames in Word and Picture; Book Two: Further Tales and Personal Memories," by Farwell T. Brown, 1999.
Citation: 188.1063.2-4
Year: 1923
Categories: Misc., People, Houses
Tags: PHILIPPINES, MUMM, DIANNE, CABIN, CHRISTOPHER NEY, SUMMIT AVENUE, RIDGEWOOD AVENUE, NEY, CHRISTOPHER
< Back to Search