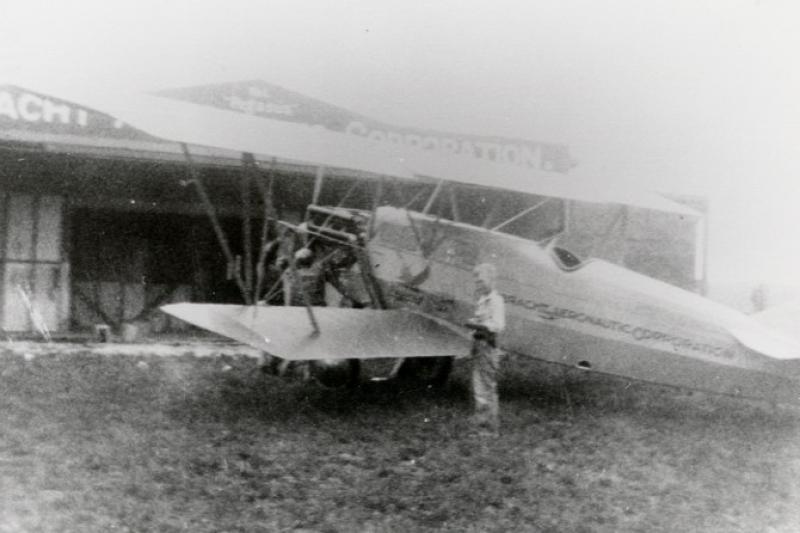 This photograph was taken by 14-year-old Farwell Brown, using a box camera, in the summer of 1925. It shows his friend Don Hutton standing next to a Hisso-powered 700 Travel Air airplane, named "Pegasus" at Gerbracht's Flying Service in Ames. This plane was at this time a one-of-a-kind model. With a cabin that would accomodate four passengers, the pilot sat on the outside to "feel the wind and hear the wires." Gerbracht's was located on East Lincoln Way about a half a mile east of the Skunk River on the south side of Lincoln Way. Both the hangar and the side of the plane read "Gerbracht Aeronautic Corporation." The enterprise was incorporated under that name on June 10, 1926, naming as incorporators brothers Wilford and Joseph V. Gerbracht. (Joe later dropped the final letter in his surname to become Joe Gerbrach.) (See also: 124.679.1; 126.692.1; and 126.693.1-6)
Citation: 123.678.1-4
Year: 1925
Categories: Transportation, People, Places/Buildings, Misc.
Tags: AIRPORTS, GERBRACH, JOSEPH V., LINCOLN WAY, HUTTON, DONALD G., GERBRACHT, WILFORD, PILOTS, BROWN, FARWELL T., GERBRACHT AIRFIELD, AIRPLANES
< Back to Search