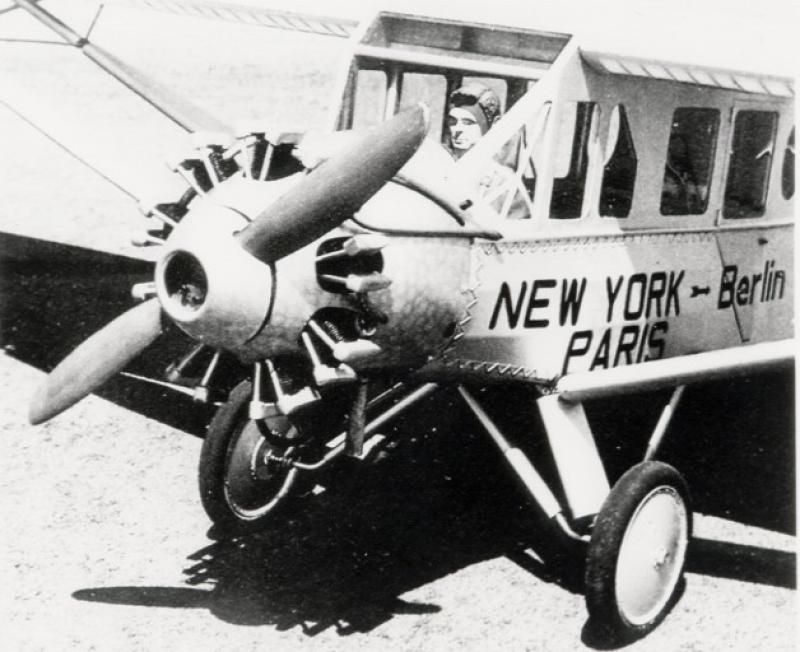 A 9-inch high pilot appears ready for engine start in a model of "Miss Columbia," the Wright Bellanca WB-2 that flew the Atlantic 16 days after Lindbergh in 1927. The 23-lb. balsa-and-pine plane was built by Steve Gray of Kitchener, Ontario (Canada). Gray flew the plane by radio-control to a 3rd place prize at the national model airplane championships, sponsored by the Academy of Moldel Aeronautics of Reston (Virginia). The full-sized "Miss Columbia" was Clarence D. Chamberlin's airplane. Chamberlin, a native of Iowa and a former Iowa State College student, flew the first plane to cross the Atlantic Ocean with a passenger aboard. They flew from New York to Berlin on June 4, 5, and 6 in 1927, covering a total of 3,905 miles in 43 hours and 31 minutes. In May of 1927, Chamberlin had been one of three contenders to make the first Atlantic crossing. Richard Byrd, one of the three, had recently flown over the North Pole. His plane was undergoing repair and testing. The third contender, relatively unknown at the time, was a young airmail pilot by the name of Charles Lindbergh. The three pilots dominated the news; Chamberlin was believed to be the most likely to be first. Fate would have it otherwise. Lindbergh, of course, was the first, leaving Chamberlin the distinction of being the first to cross "with a passenger." (For more information on Chamberlin's flight, see Chapter 23, "Second to Fly the Atlantic," in Farwell T. Brown's "Ames, the Early Years in Word and Picture," 1993. (See also: 111.612.3)
Citation: 111.612.1-2
Year: 1927
Categories: Transportation, People, Misc.
Tags: AIRPLANES, MODEL, GRAY, STEVE, PILOTS, CHAMBERLIN, CLARENCE, AIRPLANES, LINDBERGH, CHARLES
< Back to Search