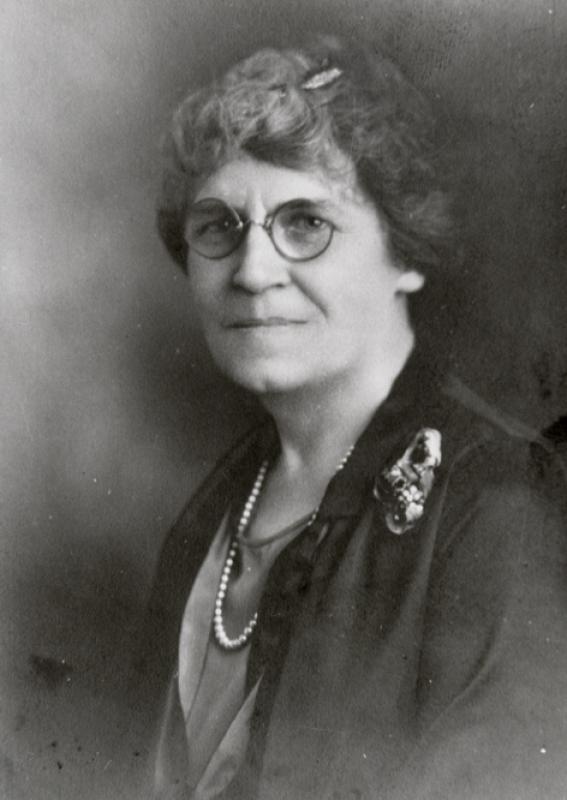 Louise Crawford, teacher for sixteen years at the Welch (elementary/junior high) School, was born on April 16, 1861, in Messena Springs, New York, to Agnes and William Morphy. In the early 1870s, the family moved to Iowa and eventually settled near Lewis, Iowa. On June 10, 1886, Louise married James S. Crawford, and they made there home in Atlantic where he was county superintendent of schools and later was publisher of the "Atlantic Telegraph" newspaper. James Crawford died in 1911. In 1913, Lousie Crawford moved to Ames where she taught the first grade at the newly organized (1911) Welch School. She was still teaching there at the time of her death on October 6, 1929, from a cerebral hemorrhage, at the age of 68. Many parents were known to say that they hoped their children might complete their work in the first grade before Mrs. Crawford ceased teaching in order that they might have come under her direction. Mrs Crawford also began the first kindergarten in Ames, which was held in the summer. Crawford Elementary School, closed in 2001, was named in her honor in 1930. She was also one of the founders of Collegiate Presbyterian Church in Ames. One of her sisters, Ina, a teacher at Ames High School, was married to Galen Tilden, the owner of Tilden Manufacturing Co., later known Collegiate Pacific.
Citation: 54.268.1-3
Year: 1928 (approx.)
Categories: Schools, People, Churches
Tags: SCHOOLS, CRAWFORD, LOUISE MORPHY, COLLEGIATE PRESBYTERIAN CHURCH, PRESBYTERIAN CHURCHES, TEACHERS, WELCH SCHOOL, CRAWFORD ELEMENTARY SCHOOL, TILDEN, INA MORPHY
< Back to Search