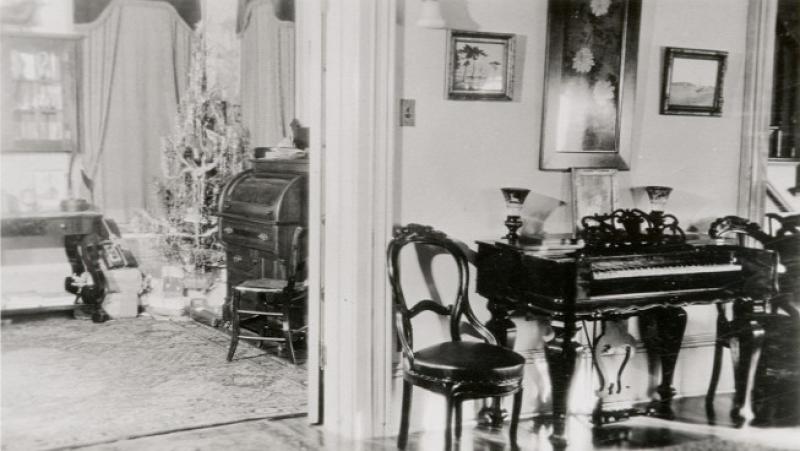 The interior of the Harry F.Brown family home at 1011 Kellogg Avenue showing the first floor living room. The house was remodeled after its original owner, Kendrick Wade Brown, died in 1926. Photo was taken, around 1935, during the Christmas season (note Christmas tree). The sliding door which had led into a parlor was replaced by the French door, creating one large living room. The melodean, built in the early 1800s, against the wall was originally in the farmhouse of Kendrick Wade Brown's sister (and Harry's aunt) Fidelia Submit Brown Gardner. Fidelia lived in Evans Mills, New York. After her death, in 1935, the melodean became the property of her nephew Harry and made its way to Ames, Iowa. Harry Brown had it restored to working order. After the death of Harry Brown, the melodean was in the home of Harry's son Farwell T. Brown until 1978 when the Brown family gave it to the Farm House museum on the campus of Iowa State University. Still in working condition [2005], it is occasionally played at special events. [See also: 160.888.4-5]
Citation: 188.1065.5
Year: 1935 (approx.)
Categories: Houses, Misc., People
Tags: MELODEAN, HOUSE, BROWN (HARRY F.), HOUSE, BROWN (KENDRICK W.)
< Back to Search