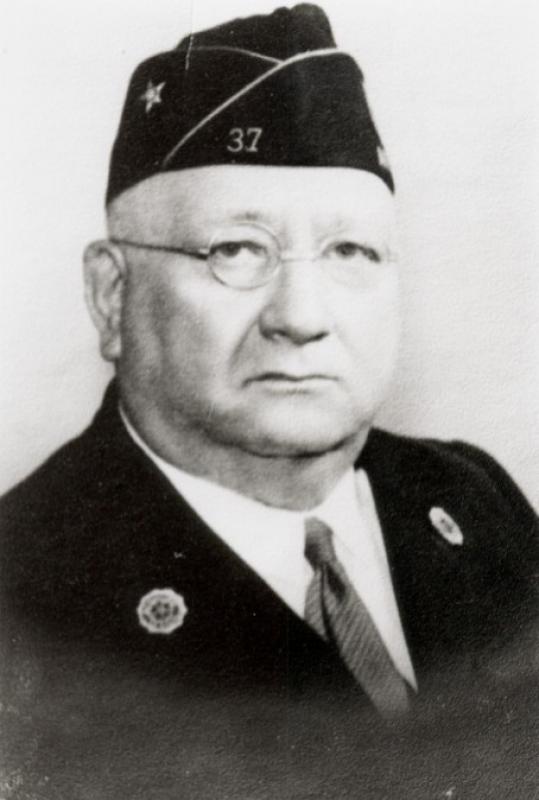 Dr. Thomas L. Rice (1871-1947), an Ames dentist who was the commander of the American Legion post #37 in Ames in 1934-35. Rice had graduated from Iowa State College in 1895 with a degree in veterinary medicine. During the Spanish-American War, he spent seven months with Teddy Roosevelt's Rough Riders as a veterinary surgeon. After the war he attended Northwestern University where he obtained a dental degree in 1905. He opened a dental office in Ames in 1905. He and his wife, Harriet McCarthy Rice, lived for many years in the house on the southwest corner of Grand Avenue and Sixth Street which was in recent times converted to Shops on Grand [2004]. Rice was chair of the Story County Republican Party, was elected to the Ames City Council in 1914, was elected mayor in 1920 and served two 2-year terms. During his tenure as mayor, Ames adopted the city-manager form of government. For more of his story see Chapter 17, pp. 81-82 of "Ames in Word and Picture; Book Two: Further Tales and Personal Memories" by Farwell T. Brown, 1999. Photo is courtesy of the Ames chapter of the American Legion.
Citation: 207.1176.1-5
Year: 1935 (approx.)
Categories: Misc., Wars & Military, People, Local Organizations
Tags: DENTISTS, SPANISH-AMERICAN WAR, CITY COUNCIL, AMERICAN LEGION, RICE, THOMAS L., MAYORS
< Back to Search