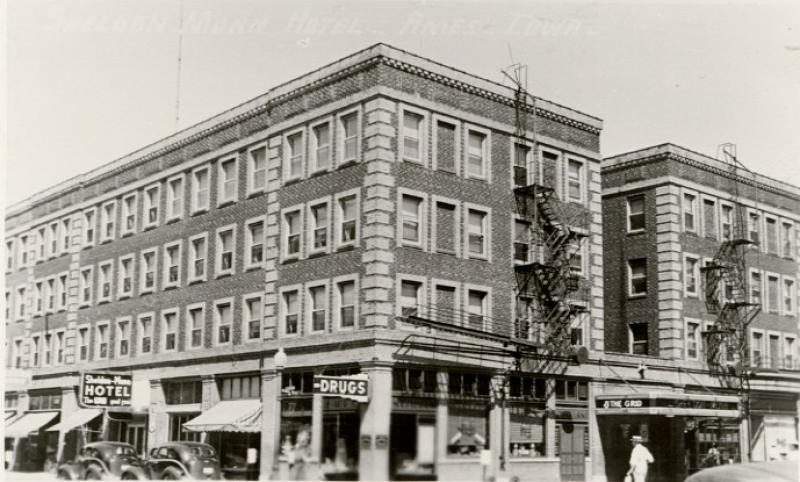 The Sheldon-Munn Hotel, taken around 1938. The corner portion of the building was originally occupied by the Story County Bank. After Parley Sheldon's death in 1932, that bank merged with the Union National Bank to become the Union Story Trust & Savings Bank and occupied the Union National Bank building at the corner of Douglas Avenue and Main. The hotel corner at Main Street and Kellog is, at the time of this photo, occupied by Brooker Drugs. Also visible on the Kellog Avenue side is The Grid, a restaurant that operated from 1938-1959 and occupied part of the hotel's former dining facility. The canopy over the front entrance is different than the one attached to the hotel when it opened in 1914. At this time the hotel was about to undergo several renovations and changes in its use. (See also: 181.1023.5)
Citation: 77.397.2
Year: 1938 (approx.)
Categories: Businesses, Misc., Downtown/Main St., Places/Buildings
Tags: BANKS, STORES, DRUG, SHELDON-MUNN HOTEL, STORY COUNTY BANK, KELLOGG AVENUE, BROOKER DRUGS, HOTELS, RESTAURANTS, GRID, THE, MAIN STREET
< Back to Search