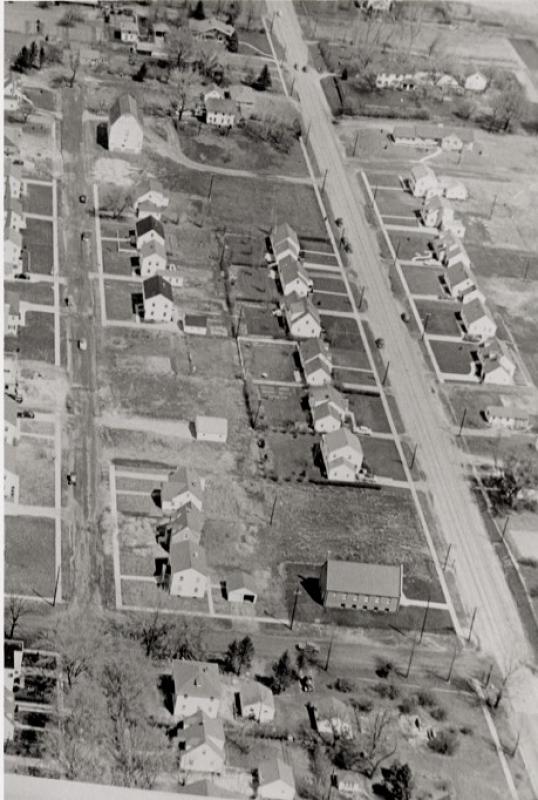 1945 aerial photograph, looking from south, at the bottom, to north, at the top. Grand Avenue (at that time a two-lane street) is shown extending from the lower right hand corner to the center top of the photograph. The Seventh Day Adventist church in the lower right quadrant is on the corner of Grand and Thirteenth Street. The church's parking lot and one residence (sometimes used as the church's parsonage), to the north of the building had not yet been constructed. In the upper left quadrant can be seen the farm house and barn of Knight's Pony Farm. During the 1920s and 1930s, the farm raised Shetland ponies for sale. (Farwell Brown owned one of these ponies as a boy and the four Knight children were classmates of his in the Ames schools.) The street in the left of the photograph, running parallel to Grand, is Harding Avenue. Housing development construction in the area of this aerial began immediately before the U.S. entered World War II in 1941, but was halted until the war was ended when it was resumed.
Citation: 189.1069.1
Year: 1945
Categories: Churches, Misc., Places/Buildings
Tags: CHURCHES, SEVENTH DAY ADVENTIST CHURCH, THIRTEENTH STREET, HARDING AVENUE, KNIGHT'S PONY FARM, AMES (AERIAL), GRAND AVENUE
< Back to Search