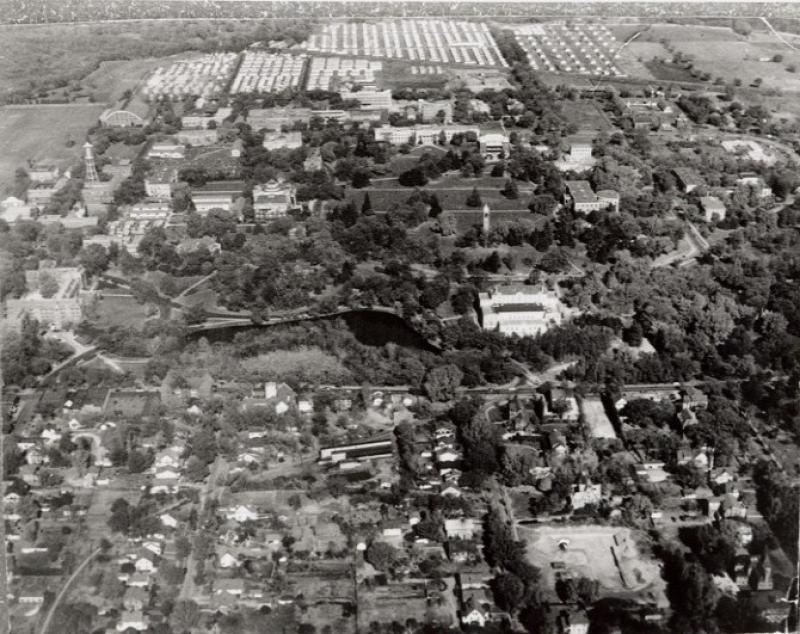 This 1948 aerial photo looks north toward the Iowa State College campus from a point just north of Knapp Street. Lake Laverne with the Memorial Union dominate the center of the photo. The Union's parking ramp was not constructed until 1966-67. Note the beginnings of the First Baptist Church construction on the east side of Lynn (the church was completed in 1950). The Lynn Avenue intersection with Lincoln Way was not alligned with Campus Drive to the north by Union until 1963. At the upper right, the Sixth Street extension from downtown was not completed unti 1949. Pammel Court in the upper center of the aerial continued post war use of both quonset and demountable type housing structures. Lincoln Way, running left and right through the center of the photo, is still a two-lane street. (It was widened to four lanes in 1958.)
Citation: 182.1026.1-4
Year: 1948
Categories: Places/Buildings, Churches, ISU / ISC, Parks & Nature
Tags: LINCOLN WAY, FIRST BAPTIST CHURCH, MEMORIAL UNION, ISC, AMES (AERIAL), LYNN AVENUE, IOWA STATE COLLEGE, LAKE LAVERNE, PAMMEL COURT
< Back to Search