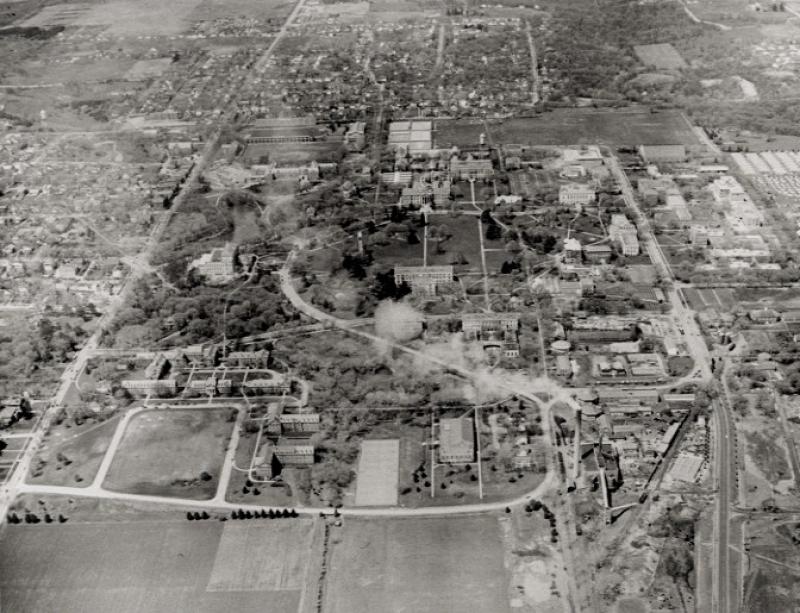 An aerial view, looking west at the campus of Iowa State College, this photograph was taken around 1949 by Olav Smedal of Valo Feature Service (1131 Northwestern Avenue in Ames). The long street on the left is Lincoln Way before it was widened. In the center of the photograph is the quadrangle with Beardshear Hall to the west and Curtiss Hall to the east, the Campanile and the Memorial Union to the south, the Library (later the Parks Library) to the north on Osborn Drive. Wallace Road is the street running south and north in the foreground. The dormitories shown in this area are Welch, Roberts, Lyon, Freeman, Barton, and Linden Hall to the west and Elm and Oak to the north. Notice that the extensive residence hall development to the east of this area has not yet taken place. (See also: 182.1027.3-5)
Citation: 181.1023.1
Year: 1949 (approx.)
Categories: Places/Buildings, ISU / ISC, People
Tags: AMES (AERIAL), IOWA STATE COLLEGE, VALO FEATURE SERVICE, SMEDAL, OLAV
< Back to Search