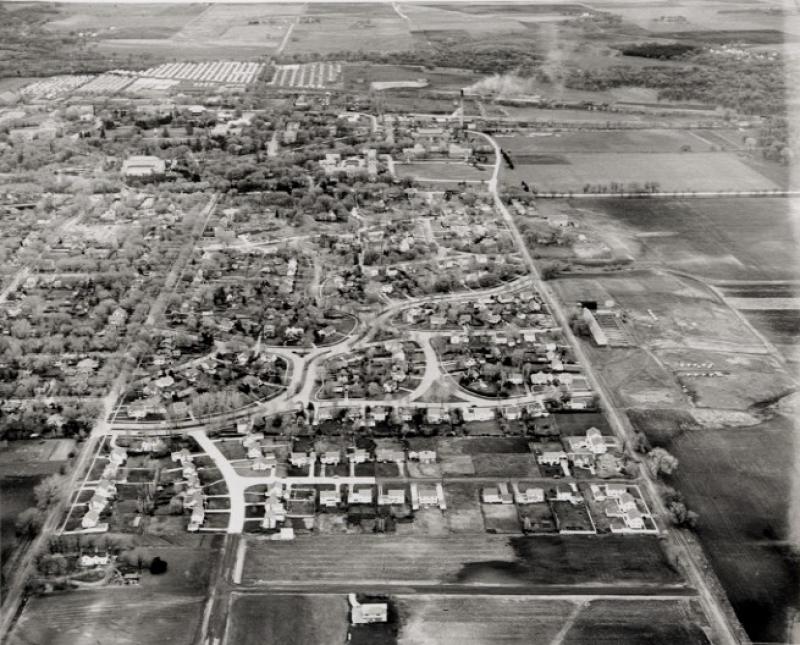 This aerial photograph was taken on May 1, 1949, by Olav Smedal. It looks northward toward the Iowa State College campus from a point between Ash Avenue on the left and Beach Avenue on the right. The undeveloped street in the foreground, with a single house on it, is McCarthy Road. Note the pioneer McCarthy home on Ash Avenue in the lower left corner of the photo. Lincoln Way has not been widened and trees line its bottomland stretch. Farm buildings face Beach Avenue's east side. Twenty years later the Iowa State Center will appear east of Beach on the low lands at the of this photo. Beach Avenue becomes Wallace Road north of Lincoln Way. The open space north of Lincoln Way and west of Wallace Road was once a coed golf course. The Linden residence hall was built there in 1957. (See also: 209.1187.2-3 which is the same aerial with a different description)
Citation: 182.1025.1-5
Year: 1949
Categories: Places/Buildings, ISU / ISC, People
Tags: LINCOLN WAY, WALLACE ROAD, AMES (AERIAL), HOUSE, MCCARTHY, IOWA STATE COLLEGE, ASH AVENUE, BEACH AVENUE, SMEDAL, OLAV
< Back to Search