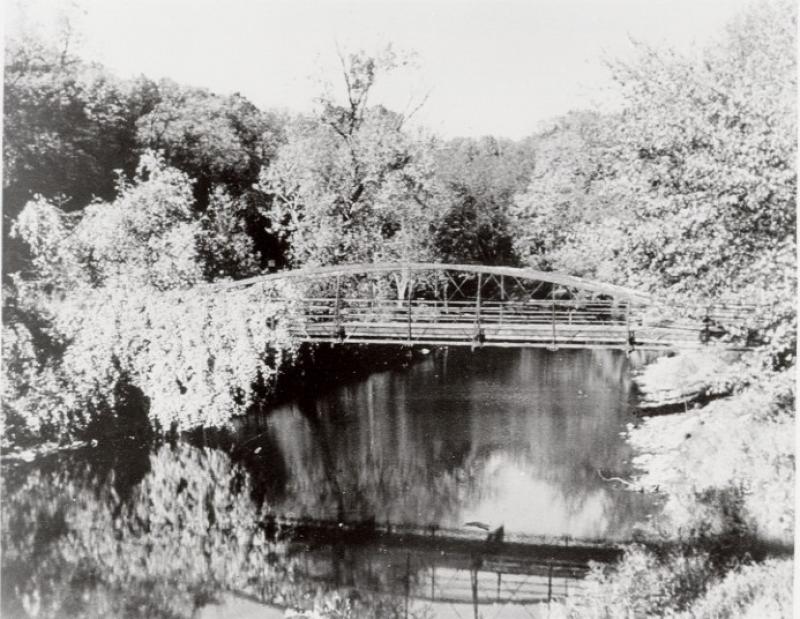 The "Old Iron Bridge"--also called the "Rainbow Bridge" because of its arc shape--over the Skunk River, near Soper's Mill, as it appeared on a Sunday afternoon in the fall of 1951 when photographed by Farwell Brown as he stood on the "new" bridge (built in 1930). His original snapshot was in color and he remembers the vibrant colors of trees surrounding the bridge. The old bridge was built in 1876 and was replaced by the 1930 bridge when the road was relocated to the west of the Rainbow Bridge. In 1977, it was placed on the National Register of Historic Places. For many years the old bridge was preserved in Soper's Mill Park and then became part of the Skunk River Greenbelt, 8 miles northeast of Ames; but the old bridge, after many human efforts to preserve it, was finally done in by an act of nature--washed out in the June 17, 1996, flood on the Skunk River.
Citation: 124.679.2-3
Year: 1951
Categories: Places/Buildings, Misc., Parks & Nature
Tags: SOPER'S MILL BRIDGE, BOWSTRING BRIDGE, FLOODS, BRIDGES, RAINBOW BRIDGE, SOPER'S MILL, OLD IRON BRIDGE, SKUNK RIVER
< Back to Search