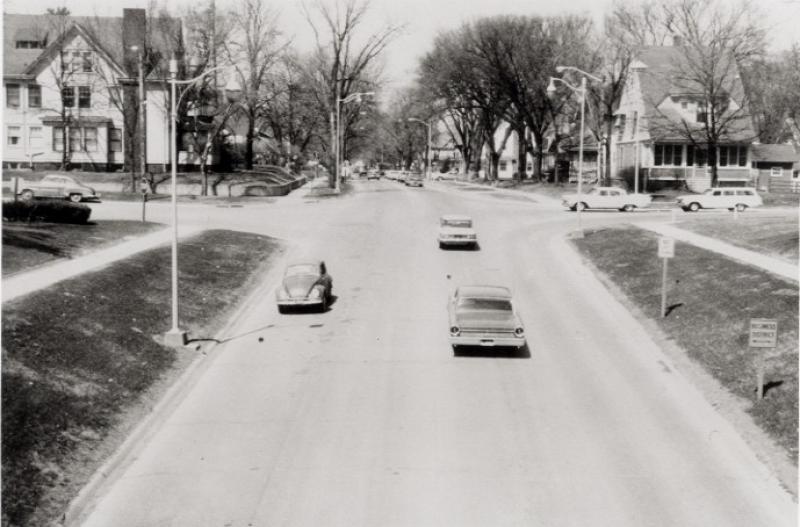 Looking north up Grand Avenue at its intersection with Fifth Street, probably in the late 1950s, showing Grand before it was widend to four lanes in 1965 from Lincoln Way north to Twenty-Eight Street. Grand was widened north from Twenty-Eight Street in 1972. The house with the high-pitched roof on the northeast corner (631 Fifth Street) was the long-time residence of Dr. Clarence H. Covault, a professor of veterinary medicine at Iowa State College (University) from 1919-1970, though he was not living in this house when the photo was taken. Dr. Covault was once the director of the animal clinic at the Iowa State veterinary school and took care of the pony of Farwell Brown when he was a boy. The house was razed in 2003 and is the site of a veterans' memorial [2004]. The house in the upper left of the photo (on the northwest corner) was removed in 1984 and is now the site of the Pyle Office Building. (Photo, courtesy of the Iowa Department of Transportation).
Citation: 210.1193.1
Year: 1958 (approx.)
Categories: Houses, Misc., People, Places/Buildings
Tags: HOUSE, COVAULT, STREETS, COVAULT, CLARENCE H., GRAND AVENUE, PYLE OFFICE PARK, FIFTH STREET
< Back to Search