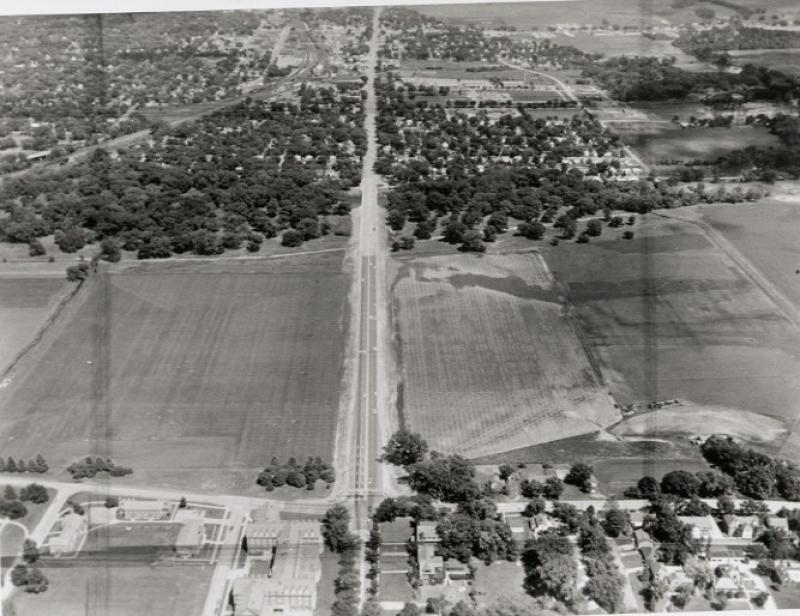 Iowa Dept. of Transportation aerial, taken around 1959, of Lincoln Way between Beach Avenue and Squaw Creek in preparation for the widening of Lincoln Way from two to four traffic lanes in 1963. Looking east from Beach before the Iowa State Center was built (large open area to the right (south) of Lincoln Way in the middle of the photograph. Dormitories can be seen in the bottom left center of the photograph (north of Lincoln Way). The open space on both sides of Lincoln Way are a flood plain for Squaw Creek and often floods. Merwin Dougal (1928-1982), a civil engineering professor (1962-1982) and head of Iowa State University's Water Resources Institute, warned university officials against building at this site, but his advice was not heeded. Groundbreaking for the building of the Iowa State Center was held on October 30, 1965. Hilton Coliseum, part of the Center complex, was badly inundated in the great flood of 1993 and the whole area has flooded a number of times since its construction. Maple, Willow, and Larch Halls were constructed in 1965/67, 1967/69, and 1968/71 with a commons area and parking lot on the north side of Lincoln Way in the open field shown in the left of the photograph. In July, 1975, a teenage boy was drowned in flood waters in the parking lot.
Citation: 200.1134.5
Year: 1959 (approx.)
Categories: Places/Buildings, ISU / ISC, Misc., People
Tags: IOWA STATE CENTER, LINCOLN WAY, DEPARTMENT OF TRANSPORTATION (DOT), IOWA, DORMITORIES, ISU, AMES (AERIAL), STREETS, FLOODS, DOUGAL, MERWIN DEAN, BEACH AVENUE, IOWA STATE UNIVERSITY
< Back to Search