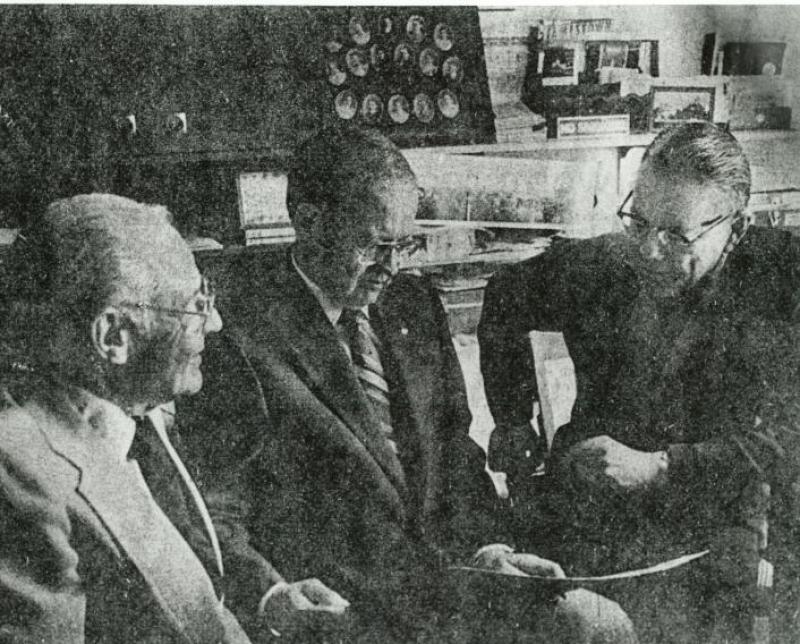 On November 17, 1980, the Ames Heritage Association came into official existance. Pictured are the first officers of the group: (left to right) Rodney Fox, secretary; Terry Adams, vice-president; and Farwell Brown, president. The three were photographed as they sat in Brown's second-floor office in the building on the southwest corner of Main Street and Kellogg Avenue. They are discussing plans for the moving, restoration, and preservation of the Hoggatt School, the first schoolhouse in Ames and the Heritage Association's first project. This photo appeared on the first page of the Ames Tribune on January 14, 1981. [See also: 221.1263.1-3; Photographs of the entire article can be seen at 60.306.1-4 and 62.316.1-2 in the in-house collection.]
Citation: 221.1262.1-5
Year: 1981
Categories: People, Local Organizations, Schools
Tags: ADAMS, F. TERRILL, BROWN, FARWELL T., FOX, RODNEY, AMES HERITAGE ASSOCIATION, HOGGATT SCHOOL RESTORATION
< Back to Search