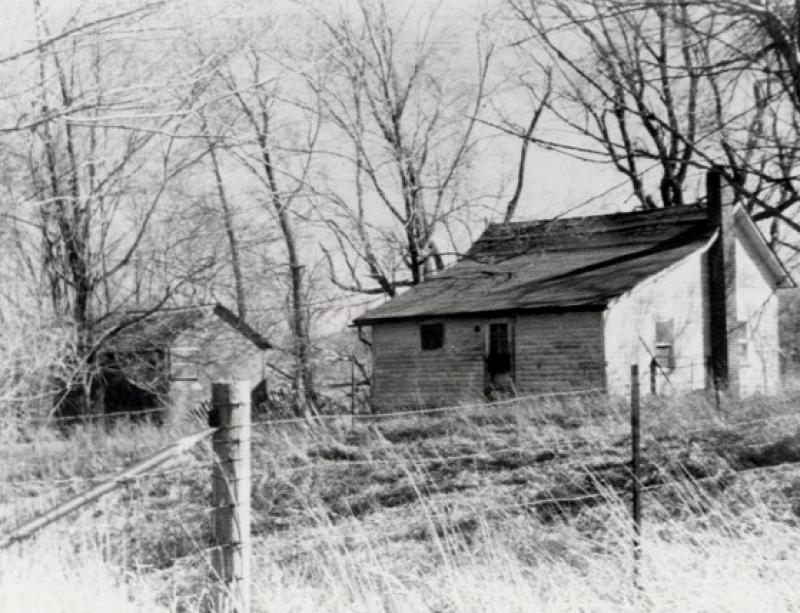 Photograph of the Bauge cabin in its original location north and a bit east of Huxley, Iowa. In 1988, the Ames Heritage Association (name changed in 2004 to the Ames Historical Society) took on as a project the relocation and restoration of the Bauge cabin. In December, 1988, the house was moved from its site near Huxley (in order to prevent its demolition) to McFarland Park, north of Ames. The structure became the property of the Story County Conservation Board, but the restoration to its original log cabin appearance was undertaken by the Ames Heritage Association. The cabin was occupied for many years by Story County pioneers Nils and Synneva Bauge, who were natives of Norway. They raised eight children in the home. The second generation of Bauges to live in the home were son Lars his wife Anna Fjelland Bauge and their fifteen children. For the full history of the cabin, the Bauges, and the restoration project, see the June, 1991, "Ames Intelligencer," the newsleter of the Ames Historical Society.
Citation: 115.635.3
Year: 1988 (approx.)
Categories: Places/Buildings, People, Houses, Local Organizations
Tags: HUXLEY (IOWA), BAUGE, SYNNEVA, BAUGE, ANNA FJELLAND, BAUGE, LARS, LOG CABINS, BAUGE, NILS, AMES HERITAGE ASSOCIATION, BAUGE LOG CABIN RESTORATION
< Back to Search