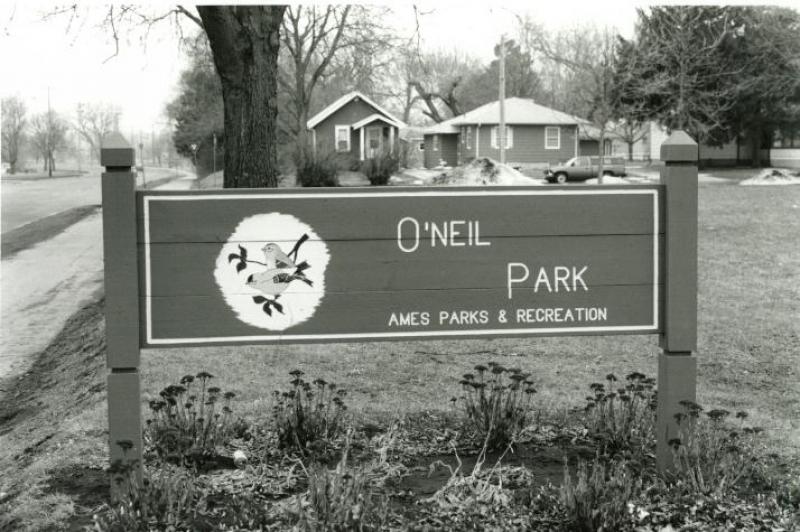 Henry and Clem O'Neil were brothers who founded the O'Neil Dairy at 115 Kellogg Avenue in the 1920s. The dairy later re-located in the old armory building on Fifth Street. Clem O'Neil (1885-1971) served on the Ames City Council for two years and was a member of the Elks, the Rotary Club, and the Knights of Columbus. Henry (1891-1967) was also active in public affairs. The brothers originally sought to build a new dairy on the three acres of land they owned between Maple and Oak avenues and South Third and Fourth streets. The city, however, refused to re-zone the area for commercial enterprise and so the brothers donated the land to Ames to create a park, which was dedicated on March 28, 1941. This photograph, taken in 1995 by Farwell T. Brown, is of the sign at the entrance to the park.
Citation: 179.1009.3
Year: 1995
Categories: People, Parks & Nature, Misc.
Tags: O'NEIL, JOHN CLEMENT (CLEM), PARKS, O'NEIL PARK, O'NEIL DAIRY, DAIRIES, O'NEIL, PATRICK HENRY
< Back to Search