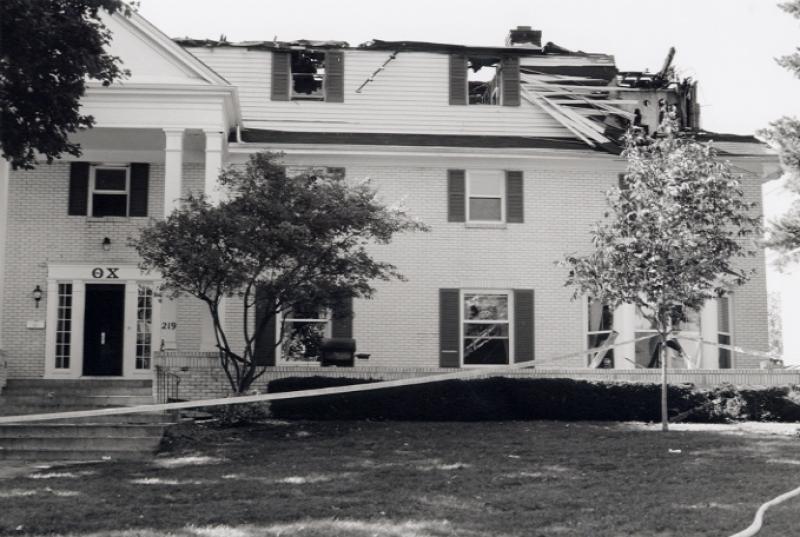 This photograph was taken on the day after a fire destroyed a good portion of the Theta Chi fraternity house at 219 Ash Avenue near the Iowa State University campus. The October 6, 1996, fire was caused by grease on the stove of the house's kitchen; damage was set at $773,000. The 24 members of the Alpha Mu chapter of Theta Chi who lived in the house moved into the Adelante Fraternity house at 318 Welch Avenue. The Theta Chi house was razed and a new structure erected on the same site. Though insurance covered most of the $1.4 million cost of the new structure, $535,000 was raised from donations of Alpha Mu chapter alumni in an effort spearheaded by Dr. Jon Fleming, an Ames gastroenterologist, a 1975 alumnus, and the chapter advisor. The new fraternity house was completed in July, 1999, and opened for occupancy in the August for the fall semester. It was dedicated on October 30, 1999, with 260 alumni and family in attendance.
Citation: 192.1087.3
Year: 1996
Categories: ISU / ISC, Places/Buildings, Misc.
Tags: FRATERNITIES, ISU, FRATERNITY HOUSES, ISU, ASH AVENUE, IOWA STATE UNIVERSITY, FIRES, THETA CHI FRATERNITY
< Back to Search