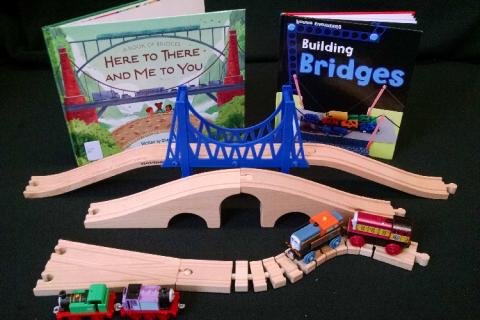 Everyone’s talking about STEM and STEAM lately; what are they and why do we care?

STEAM Education is an approach to learning that uses Science, Technology, Engineering, the Arts, and Mathematics as access points for guiding student inquiry, dialogue, and critical thinking. We definitely see this approach in K-12 school classrooms, but did you know that even younger children are capable of using it in their learning through play?

You may have heard the saying that play is a child’s work, and it is true! During play, children learn to test how things work. Let’s explore an activity that seems like simple play, but actually incorporates STEAM: Playing with blocks.

Baby’s start with the first stage of playing with blocks—holding them—soon after they discover their fingers. Then they move on to carrying the blocks. When a child begins to sit confidently, and starts crawling and walking, they usually begin to stack the blocks.  As their brain development and fine motor skills advance, they begin building bridges and creating rough enclosures like squares and circles. The child calls these structures houses or other places. Toward the end of this phase, they begin adding other non-block items to their creations. The next stage includes creating symmetry, evenly matched or repetitive patterns of blocks. And finally the two stages of creating structures occurs at the early school age period and later as the block building becomes more intricate called representational block playing.

A variety of thinking goes on in the child’s mind during these stages. Wondering what happens if they do this or that. Trying the same thing over and over again and discovering if it works differently. Experimenting with adding and subtracting blocks so they can make a better bridge or base for their castle. Building one side and then copying it so it looks identical to the other side for a symmetrical structure. Deciding what scale of buildings to build when comparing the size to the dolls and cars they have added to their play. And finally, in the representational stages, actually drawing and then building, creating taller walls, and being precise in block placement.

Now think about these scientific processes: Creating a hypothesis, identifying cause and effect, solving problems, trial and error. Doesn’t that sound like the child’s block activities? STEAM is included in the curriculum for students of all ages, but many of the skills are already learned through play! Just as a child doesn’t just one day become a reader, a student doesn’t become an engineer out of the blue. Foundation skills are developed and learned so the next phase of learning can be successful.

One way Ames Public Library supports learning is by offering STEM or STEAM kits for free checkout. Some kits lend themselves to our younger children, like Humpty Dumpty had a Great Fall, and some include activities geared for older elementary ages, such as using a microscope to analyze cells or using a telescope to look at the stars. Each kit contains two books, one fiction and one nonfiction, which highlight the topic of the kit. (Books are a perfect partner in all types of learning!) The kit also includes the items needed to carry out and experience the STEAM activity.

Try out these kits by placing a request for one in the online catalog. Once you receive notification that it’s ready, you can pick it up with your holds in the lobby. A big thank you goes to the Ames Public Library Friends Foundation and a variety of funders who have made these kits possible!