Understanding Social (In)Justice Through the Power of Place 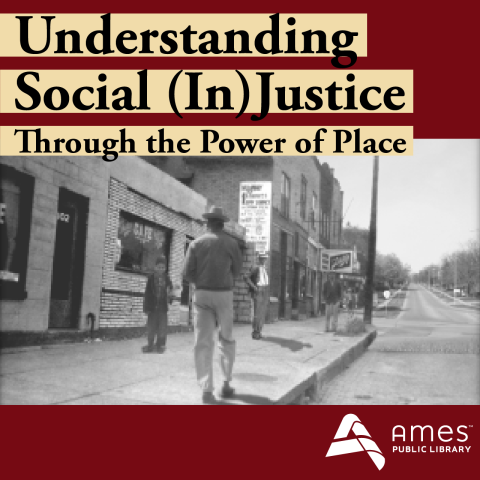 Understanding Social (In)Justice Through the Power of Place

According to Oxford Languages, social justice is “justice in terms of the distribution of wealth, opportunities, and privileges within a society.” By extension, social injustice describes the opposite – a lack of justice regarding the way those privileges and resources are distributed. A solid understanding of both of these principles contributes to improved equity, diversity, and inclusion. But if you’re like me, just reading the definition isn’t enough. I always benefit from more specific examples and more in-depth conversation around complex social topics like this one. Once I have a more complete understanding, I can begin (or strengthen) the practical work.

During the month of October, Ames Public Library (APL) is excited to offer a four-week workshop series entitled “Understanding Social (In)Justice Through the Power of Place.” These interconnected, highly interactive workshops will explore the history of the Center Street neighborhood in Des Moines, and spark conversations regarding racialized inequity, its relationship to 1950s urban renewal, and other policies and practices that disproportionately impact Iowa’s Black citizens. The workshops build on one another from week to week, so participants are encouraged to attend all four. Registration is open until October 9 on APL’s calendar page, and the workshops will be hosted over Zoom on October 9, 16, 23, and 30 (all Saturdays) from 10am-12pm.

The workshops will be led by Dr. Madison DeShay-Duncan and Richard Duncan. Dr. DeShay-Duncan created “The Center Street Story: An Urban Renewal Retrospective” documentary and founded Community Legacy Matters, Inc., a nonprofit organization dedicated to creating educational resources about Iowa’s culturally significant but historically underrepresented communities. She also works as an Assistant Teaching Professor at Iowa State University, focused on social justice in education. Richard Duncan narrates the documentary, formerly lived on Center Street, and contributes a unique perspective on community and national history during the 1950s and the Civil Rights Era. The workshop series is supported by the Ames Public Library Friends Foundation; Iowa State University’s Office of the Vice President for Diversity, Equity, and Inclusion; and Collegiate United Methodist Church and Wesley Foundation.

If you would like to learn more about social injustice, particularly with regard to race and housing or urban planning, APL’s collection includes materials on several related topics. “The Color of Law: A Forgotten History of How Our Government Segregated America” by Richard Rothstein explores segregation through racial zoning, tax breaks for prejudiced organizations, public housing that divided previously integrated communities, and other means used to reshape urban areas along racial lines. In Deirdre Mask’s “The Address Book: What Street Addresses Reveal About Identity, Race, Wealth, and Power,” Mask uses international examples to explore how people are defined by where they live. She also includes a few chapters centered on the relationship between race, geography, and street names in the United States. “Race for Profit: How Banks and the Real Estate Industry Undermined Black Homeownership” by Keeanga-Yamahtta Taylor examines the idea of predatory inclusion, which became evident after the end of formalized redlining. Taylor also describes how this predatory inclusion financially benefitted bankers and real estate agents and how it resulted in hardships and foreclosures for a large number of Black homeowners.

For a broader overview of the equity, justice, and inclusion issues faced by BIPOC individuals in America, I would recommend taking a look at “An African American and Latinx History of the United States” by Paul Ortiz. Approaching white privilege and racial discrimination from another angle is Matthew Desmond’s “Evicted: Poverty and Profit in the American City,” which explores housing discrimination and the disproportionate impact of eviction on Black people (particularly Black women) in urban areas.

If you’re interested in this local history and the exploring the surrounding social justice and racial equity issues, I would encourage you to register for “Understanding Social (In)Justice Through the Power of Place.” I know I’m looking forward to it!