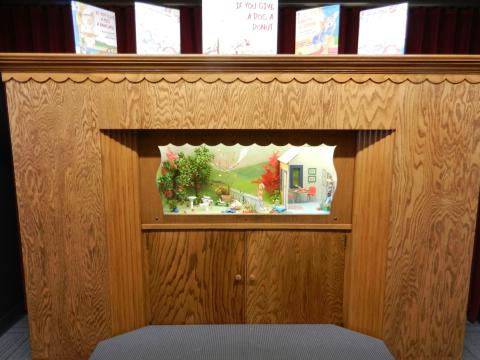 Written in 2018 by Christina Robinson

Did you know Ames Public Library’s Youth Services employees, in addition to their other duties, do window cleaning?  On any given day upon entering the youth area, children and adults alike stop to peer into the window of the Little Theater.  That is the name given to the display case that features a children’s book diorama.  And yes, we wipe down the window at least once daily.  Children like to get really close.  We love it when they do!

The Little Theater has a rich history, starting with Letha Davidson, Library Director, 1929-1963.  Davidson had a fascination for miniatures and used her collection to create scenes from children’s books.  She had the display case built just for that purpose in 1939.  It has been a feature of the youth area ever since.  Fellow employee Ruth McCaveny shared that love of miniatures.  She worked together with Davidson creating many of the scenes.  Even library pages and desk assistants helped, some recalling how the displays were slid in from the front.

In December 1965, under the directorship of Margaret Davidson (Letha’s sister), Adele Figura was hired as the library’s display artist.  Figura was adept at creating these beloved scenes, using crayon pastels or colored pencils for the backgrounds, often applied to the backside of wallpaper.  She also collected artificial plants, dollhouse furniture, and a menagerie of household items, which she transformed into useable components.  Though some dolls or characters were loaned to the library, Figura often created them by hand.  The scenes were changed out about every two months.

The Library’s 1985 expansion and remodeling set the Little Theater in a place of prominence–the alcove entering Youth Services.  A specially designed step stool was added, allowing children of all ages a good view of the window.  Many, my own included, described it as “Magical!”

1993 brought more artists into the mix.  Figura retired, Amy Sengbush, and then Shelley Hart filled the position, respectively.  By 1995 Sheryl Fricke, a youth department employee, joined Hart in creating the scenes.  They also continued Figura’s more recent tradition of creating large signs to accompany the scene in the window.  Placed on top of the Little Theater, these signs left no question as to what book was being featured.

In 1999 Fricke moved away and I was hired to create the youth department’s displays and graphics.  Naturally, this included the Little Theater.  Shelley and I worked together at first, then tried alternating scene creations.  We quickly realized she had the talent and passion for the signs above, whereas I preferred doing the scenes themselves.  We divided up the tasks.  When Shelley left the Library in 2003, I took over all things “Little Theater.”

In 2012, Ames Public Library went through another renovation/addition.  The Little Theater was moved to storage and once again architects were asked to find it a place of prominence.  The ReNewed Library opened September 2014 with the Little Theater positioned just inside the youth area.  Sadly, it became evident that some cosmetic repairs were needed.  It was hauled away again.  Repairs were made, the wood was refinished, and LED light strips were installed, replacing the original incandescent bulb system.  I still wanted colored lights– they help set the mood of the scene.

Folks often ask where we get the items for each scene.  Cupboards upstairs are filled with miniature furniture, objects, backgrounds, bases, paper, and materials.  What we don’t have I often make–  using polymer clay, paper maché, etc.  The library’s book collection provides endless ideas for scenes.

APL employees believe the Little Theater is unique; a one-of-a-kind treasure.  It introduces children to the joy of reading AND develops early literacy skills.  On any given day you’ll hear children counting or learning new vocabulary as they search for various items. They even repeat the stories.  Many express a desire to play with the contents.  L. Davidson was wise in having glass separating little hands from the scenes.

Next time you’re in our neighborhood, be sure to stop by and look into the Little Theater window– but don’t worry, we’ll wipe off your nose or hand prints, too!