The Ames Public Library was not originally a free public library. During the 1890s, subscribers paid dues to keep a small reading room open. For example, in 1897 a local P.E.O. Society purchased 33 shares of stock and later voted two dollars per month to support the library.

In 1902, the P.E.O. local chapter appointed a committee to investigate how a free public library might be established. Ames Mayor Parley Sheldon met with the group and then later wrote to Andrew Carnegie asking for $10,000 to erect a library building. Ames received the grant. By 1904 the city voted to accept Carnegie's gift, created a Board of Trustees, received a land gift for the building, constructed the library, and hired a librarian. October 20, 1904 was the first day of business.

Building expansions in 1907 and 1940 made it possible for the Library to increase collections and serve more citizens. The Library tried to reach more people with a branch near campus which opened in 1946. It later closed in 1950 due to low use. Outreach, however, was still a goal so in 1966 Bookmobile operation began. 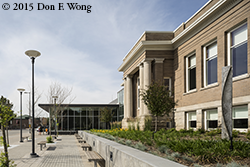 By the 1980s, the Library building could not support the growing demand for services. In 1983, a bond referendum for a library addition passed. In 1985, the new expansion and the remodeled original building were dedicated.

In November of 2011, voters approved a $20 million bond issue to once again expand and renovate the Library with 76 percent of the vote.

In fall of 2012, the Library moved to a temporary location in Lincoln Center, where it operated for a year and a half.

On September 14, 2014, Ames Public Library reopened the renovated and expanded building at 515 Douglas Avenue. Designed by MSR Architecture, the renewed building blends and contrasts the aesthetics of the original building and all of the expansions with the contemporary addition.

See "A Great Story," a documentary about the Library Renewal Project, here >>