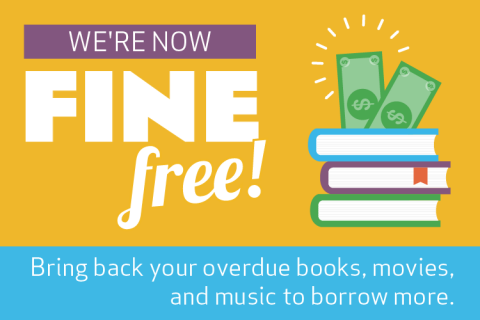 Ames Public Library is joining hundreds of public libraries across the country that no longer charge overdue fines for items that are returned late. This is one step in the Library’s commitment to providing equitable access to Library materials and services.

Library Director Sheila Schofer explains “Equity and access are core values for libraries and play a big role in our new Strategic Plan. Overdue fines disproportionately penalize people with lower incomes and can even keep them from using the Library.”

Overdue charges have long been used by libraries with the hope that fines would encourage people to bring back materials quickly, making them available for another person to check out. However, studies and the experiences of other fine free libraries contradict that assumption. As San Francisco Public Library states in its white paper on going fine free, “Overdue fines do not turn irresponsible patrons into responsible ones, they only distinguish between patrons who can afford to pay for the common mistake of late returns and those who cannot.”

In fact, Ames Public Library already has some experience of its own due to the COVID-19 pandemic. When the Library closed in March, due dates were extended and fines were suspended. Ames Public Library Customer Account Services Manage Tracy Briseño reports that during the closure and continuing during curbside service and lobby service, “the vast majority of patrons have used and returned items responsibly, just as they have in the past. Many have been thrilled to find that losing track of due dates in this chaos didn’t rack up huge fines, which could be especially hard to pay right now.” Instead, patrons were able to return the items and continue using Library resources, including online homework help and Wi-Fi hotspots.

This change to fine free will only effect overdue charges. The Library will continue to charge for lost or damaged items. Briseño says “The goal is still to get materials back so more people can use them. We will still be sending reminders, and accounts will still be blocked when their charges reach the limit. But those charges will represent real, physical items that can be returned to get your account back in order.”

“I’m sure there will be people out there worried how this effects our finances,” says Schofer. “In reality, overdue fines represent less than 2% of our budget.” The Library’s Board of Trustees has already adjusted the budget to account for the change. Sheila adds “We’re happy to take donations instead of overdue fines! If you want to support our move towards greater equity, the Ames Public Library Friends Foundation takes donations in any amount. Plus you can donate online!”